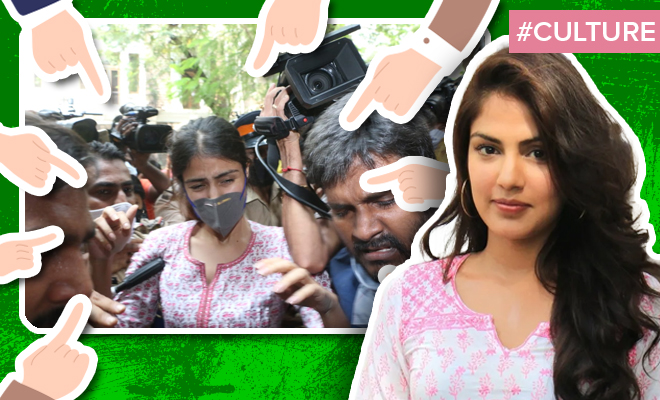 On 14th June last year, just about this time, my family and I were settling down for a lazy Sunday lunch when my phone exploded. Incessant pings came in from various groups, there were rumours that Sushant Singh Rajput was no more. I waited, I didn’t want to pass on the message because you know how Whatsapp can be. But I googled it and unfortunately, it was true.  Sushant Singh Rajput had died by suicide. The news alone was enough to shake you up. And as a nation, we experience distress because he represented things we aimed for, things we assumed he had, success, money, fame.

Then a series of investigations began by the Mumbai Police but even before it could go anywhere, armchair activists, comfortably curled up in their homes declared that Rhea Chakraborty, Sushant’s girlfriend at the time, was to blame for what happened. There were entire campaigns called her the culprit. She was blamed, without any evidence, of not loving him enough, of taking money from Sushant and for anything else that people were irate about that day.

Adding generous amounts of fuel to the fire was Kangana Ranaut who went on a rampage about bullying, nepotism and drugs in Bollywood. Rhea Chakraborty’s statements were recorded by the Mumbai Police but despite no evidence, social media was filled with posts demanding Rhea’s boycott and that she was to blame. Then, Sushant’s father filed an FIR against Rhea. After many twists, the CBI is roped in to investigate the case. Rhea Chakraborty and her whole family is questioned. Her brother included. Raucous cries demanding justice for Sushant rise again on social media. People bay for Rhea’s blood, she’s responsible, apparently.

Long before the authorities had made any headway in the case, Rhea Chakraborty was painted as the person responsible for Sushant’s death. When she didn’t put up a post on social media condoling his death, people implied it was because she was a cold-hearted person. When she did put up a post, the comment section was a riot calling her everything from a bitch to a gold digger, the media trial of Rhea Chakraborty was alarming. What she wore to her interviews and investigations was dissected. She was hounded by journalists outside her home, social distancing be damned. Actresses and people from Bollywood who spoke up in support of Rhea and asked that this witch hunt be done away with were slammed and accused of being sellouts.

The Death Knell For Rhea’s Career

And one year on, after spending a month behind bars, Rhea is still bearing the brunt of the media circus that followed Sushant’s death. As reported by the Outlook, work for Rhea has dried up. There are no movies, OTT shows or even appearances that she has in her kitty. She has one film in the pipeline, Chehre and that’s still not released. Anyone from Bollywood who spoke up in favour of Rhea had their movies boycotted. Mahesh Bhatt was vocal about how what was happening with Rhea was wrong and the various SSR fan clubs called for the boycott of Sadak 2 when it released last year. The movie tanked and this despite having Alia Bhatt in the lead.

Reportedly, Rhea has not signed or even completed any other movie with even filmmakers who had offered support last year, gingerly stepping away from offering her anything concrete. Sure, people are wary, court verdicts and stuff can be tricky but this trial of Rhea Chakraborty is entirely driven by overzealous fans looking to be the judge and the jury.

We are not saying this happened because she’s a woman but the tropes and the stereotypes abound. Labels like gold digger are rarely applied to men, even when the women in the relationship are making more money.

Rhea’s career has taken a severe fall and she never even got a chance. This is how we treat our women. And we need to do better.