Nirbhaya, Disha… IPC Section 228A Calls For The Name Of The Victim Of Rape To Not Be Disclosed. Why Is This The Victim’s Shame? 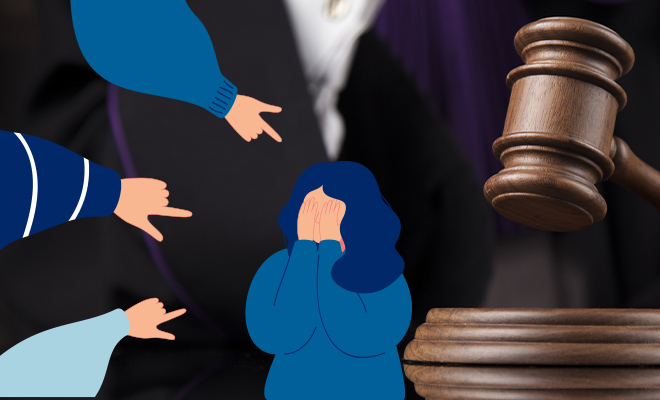 We don’t get it. Excuse us if we sound like irate feminists but it’s because we are irate feminists. In fact, at this point, we are irate humans because anyone who has been witness to the chain of events that have occurred in India recently, will be pissed. It’s abhorrent, frustrating and makes us feel entirely helpless. We’re talking, of course, of the rape and ruthless murder of Priyanka Reddy. The four accused in the case were then shot down in a police encounter.

And while we wrote out article after article about the situation in the country, the law, the politics of it all and whether this was all justice or not in the end, we have had quite a few comments on our articles asking us not to name the victim or use the name that’s being used in media – Nirbhaya for Jyoti Singh – the victim of the horrific rape crime of 2012 and now Disha for Priyanka Reddy.

And our question is why. And it has to do with Section 228A. Specified as the section that is concerned with the disclosure of the identity of the victim of certain offences such as rape, section 228A of the Indian Penal Code suggests that ‘Whoever prints or publishes the name or any matter which may make known the identity of any person against whom an offence under section 376, section 376A, section 376B, section 376C or section 376D is alleged or found to have been committed (hereafter in this section referred to as the victim) shall be punished with imprisonment of either description for a term which may extend to two years and shall also be liable to fine.’ Which in the terms of a layman means that the identity of a victim of rape needs to be kept discreet under this section of the law.

Except we are wondering why. Why is the name of the victim to be hidden? It boils our blood because again, yet again, patriarchy has raised its ugly head. Again, we are worried that the victim and the family will be brought to disrepute. And again, we must question – why is the repute and honour of the victim tainted? Why the fuck isn’t it the rapists’ shame? There is nothing to blame the victim here for. And this needs to stop now. Here.

Also Read : Was Justice Really Served In The Priyanka Reddy Case? Perhaps In Some Ways, But We Are Conflicted

We do recognise that the purpose of not disclosing the identity of a victim is also to not put her and her family’s life in danger of threat. We understand and respect that the repercussions of this are too broad to be explained with an act in the subsection, but it also doesn’t mean that we take this as a given and continue to pretend it’s not entirely sexist in its nature.

“The name and identity of rape victims is meant to kept anonymous to protect them from the shame and prejudice in the eye of the society, because as disheartening as it may sound, the truth of the matter is that if a name of a woman is splashed across newspapers as a rape survivor, chances are the society would shun them and she may not be asked for a hand in marriage,” said Advocate Raghav Bansal when he was asked about the rationale behind the section.

“The idea behind it is two-fold. First, that the government recognises the kind of taboo there is to this entire topic of rape and it is to prevent the taboo from creating a ripple effect that will go way beyond the life of the victim, to her family and those known close to her, that this was brought into place. Media houses are quick to splash the name, one publication after the other, but they do not realise how even though rape is a state offence, it is also a personal offence and the fact that the tag of being and recognised as a ‘rape victim’, never really washes itself off of the person is something too big to ignore. If tomorrow, a survivor would want to even move past it, the fact that the first thing that would pop up when their name is googled, is what this is about. Because once you let their identity known, you’re sealing their fate forever. And the second aspect of it would be to keep in mind the safety of the victim, of it’s family that might be put into a greater danger by the accused or those close to them, because most of the times, these are irrational crimes of passion. The Unnao rape survivor’s family being met with an accident or the survivor herself being put on fire, are the very kind of situations these sections in IPC means to protect, and if it comes at the cost of addressing them with a name that is not theirs, then be it,” said another senior advocate on the matter.

And honestly, even though the thought with which I wanted to pen this story down was to discuss just how annoying it is that we continue to fuel the fire of shame that’s lit on the victim’s name, we realise the very real threat revealing the name of the victim poses to the family. The disgrace that is the Unnao rape is an example. Then again, to strip a victim of her identity also seems unnecessary.

We are angry, we are restless and we are hungry in search of justice, but maybe we realise how everything must follow an order and process and no matter how charged we are to fight the system, we must follow it. Then again, we are never going to stop asking for regressive stances to be changed.

Also Read : Rangoli Chandel Says A Temple Needs To Be Built Where Priyanka Reddy Was Burned. Why Sensationalise Such A Delicate Matter?