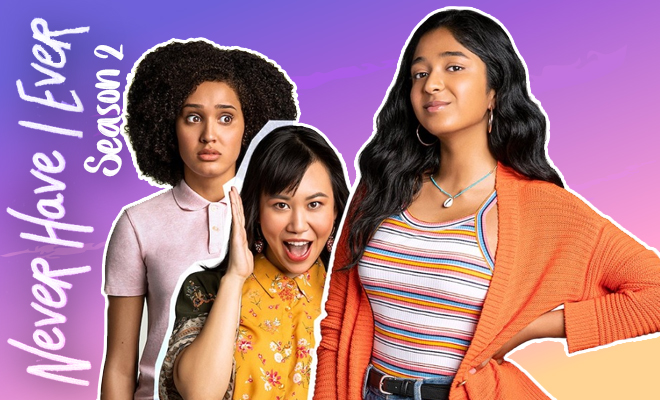 Never Have I Ever Is Getting Renewed For Season 2. We Can’t Wait

Then content was being created for us and suddenly, we could see a little bit of ourselves in them. While shows like Sacred Games appealed to our side that loves a good thriller, shows like Never Have I Ever spoke to the huge Indian diaspora that lives in the USA and other countries outside of India.

Honestly, I enjoyed Never Have I Ever because it offered a sneak peek into the lives of my cousins who lived in ‘western’ countries. I say western countries because the experience of a Gulf child, like me, is entirely different. Never Have I Ever’s season 1 perfectly showcased an Indian child’s struggle to fit in while still straddling her culture at home. It showed the confusion of first generation Indian parents who wanted to be rooted in all things Indian but also be a friend to their child and understand the concepts thrown at them by this new society they’ve been thrust into. It made for a fascinating watch. Which is why, when they announced the show was getting renewed for a second season, I was excited.

ALSO READ: Never Have I Ever Review: There Are A Bunch Of Indian Stereotypes But It Raises An Important Point About Indian Parents And Mental Health

I will admit, the standards for what will excite me at this point are pretty low. You tell me I can go to a restaurant and I might wet my pants with excitement. But I enjoyed this show, though I did think it was dramatic in bits and a little problematic in bits. From the announcement, it looks like all of the peeps from the first season are going to be on – her friends, mother, boyfriends etc- and presumably, there will new people as well.

But here’s what I want from the show. I would like to see Devi deal with her father’s death – a plot point that they used and one that wore thin in season 1. The mother, played by Poorna Jagannathan seems torn and for her character’s sake, I hope she finds some sort way to move on. The closure came about in the last season. I would also want to see what drives her character because her seesaw behaviour between being virtuous and modern seems very jagged right now. Let’s hope season 2 has plenty to offer. Right now, I am excited.