Neena Gupta Talked About Ageism In Bollywood And She’s So Right. We’ve No Idea What Rangoli Is Talking About Though 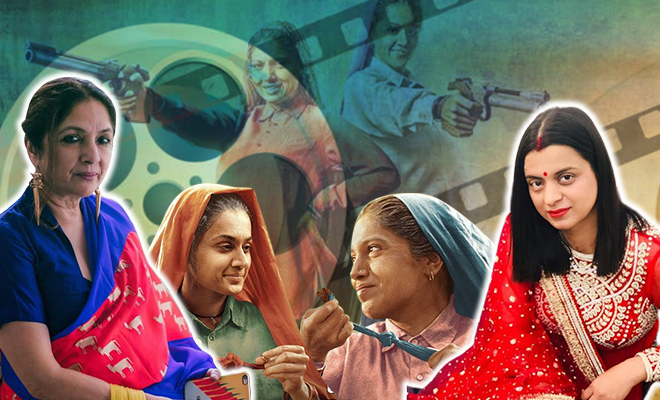 Just the other day, during a very intense conversation with my dad about our age gap and how we belong to such different generations, we both realised that if there is one thing that still hasn’t changed in all of these years from then to now, it is the fact that actors like Shah Rukh and Salman Khan were playing the lead roles in movies. In their 30s, they were playing teenagers. In their 60s, not much has changed. They’re still playing younger characters. But slowly, scripts are becoming the driving force so if a character has to age, then the actor has to be on board. Then again, if younger actresses are going to play the roles of older women, won’t that take away roles that are perfect for older women? That’s exactly what veteran actress, Neena Gupta has to say.

The promotions of the movie Saand Ki Aankh are coming up. In the movie,  Taapsee Pannu and Bhumi Pednekar can be seen playing the roles of two women sharpshooters – Prakashi and Chandra Tomar, who are in their 60s. And while most of the buzz around the movie has been about how well the two actresses have taken on badass roles of the nani duo, there have been a select few who have pointed out the ageism in the casting.

I love @bhumipednekar and @taapsee but I kinda wish older actors were cast in these roles. Could you imagine @Neenagupta001 and @AzmiShabana or Jaya Bachchan? #SaandKiAankh

A particular tweet that read, “I love @bhumipednekar and @taapsee but I kinda wish older actors were cast in these roles. Could you imagine  @Neenagupta001 and @AzmiShabana or Jaya Bachchan? #SaandKiAankh” recently went viral for saying what many have been feeling. Actress Neena Gupta took to twitter to reply how she too agrees with the feeling. She replied, “Yes i was just thinking about this hamari umar ke role toe kamsekam humse kara lo bhai.” And we totally understand where she is coming from.

It is great that the actresses have been able to do justice to such challenging roles and transformed themselves fabulously to look the age and the part, but it does, perhaps makes much more sense to cast actresses who wouldn’t just fit the age bracket but also bring the character more life and reliability coming from their own experience. When we have such seasoned and brilliant actresses amongst us like Neena Gupta, Madhuri Dixit, Shabana Azmi and the likes of them who, if now we think about it, could’ve fit perfectly well in the role and even brought  more to the table.

And while we did agree with Neena Gupta there, we completely dismissed what Rangoli Chandel had to say on the matter. Better known as Kangana Ranaut’s unhinged sister, she once again butted into a conversation that doesn’t concern her and wrote, “Neena ji Kangana was offered this movie and she loved the true story of grandmom’s achievements she suggested yours and Ramya Krishnan ma’am’s name for lead roles but these men can’t remove deeply rooted sexism from their filthy brains.” We are not sure which men she’s talking about and why filthy brains must be included but then there’s no telling with Rangoli, so we are going to let that slide.

But let’s keep that aside. We agree with Neena Gupta when she talks about offering age appropriate roles to women who deserve it also. By merit and by virtue of their age.

Also Read : Neena Gupta Is Collecting Accolades For Her Powerful Performance As A Varanasi Widow In A Story That Is Important To Tell