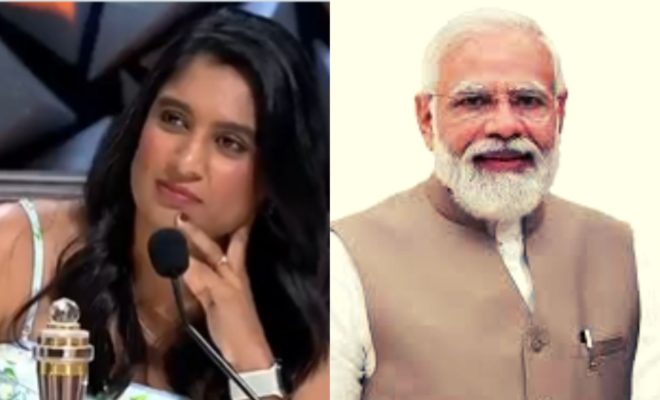 Mithali Raj is one of the legendary cricket players who took the Indian Women’s Cricket team to new heights. The cricketer recently announced her retirement from the sport ad the news was quite surprising. However, the legend has given us many historic moments on the cricket ground that every Indian shall cherish. A new movie around Mithali Raj’s life is all set to be released. It is Shabaash Mithu starring  Taapsee Pannu. During the promotions of the movie, Mithali Raj recalled an incident when Prime Minister Narendra Modi motivated the women’s cricket team after the loss in the world cup 2017.

Under the leadership of Mithali Raj, the Indian women’s cricket team reached the finals of World Cup 2017 but sadly could not win the trophy. Mithali Raj visited the sets of Superstar Singer to promote the upcoming movie, where she was asked about the experience of interacting with PM Narendra Modi. To this Mithali replied that on their return after the world cup, PM Narendra Modi took out time for the team, and interacted with each player. She added that the PM also answered everybody’s questions and that he acknowledged every cricket player by their name. As per the report, Mithali also stated that Narendra Modi also told them that they might have not won the world cup but they did win hearts. The cricketer also called this a “moment of honour” and said that the words of the Prime Minister were quite inspirational.

.@M_Raj03 recollects how @narendramodi ji cheered them, motivated & encouraged every single player despite they lost the Final.

Also Read: ‘Shabaash Mithu’ Trailer Is All About Mithali Raj’s Rise In A ‘Gentleman’s Game’ As She Establishes The Women’s Cricket Team’s Identity

The Indian Prime Minister has often been seen praising the country’s athletes and keeping up with their achievements. Narendra Modi through his social media platforms actually keeps the spirits of our athletes alive.