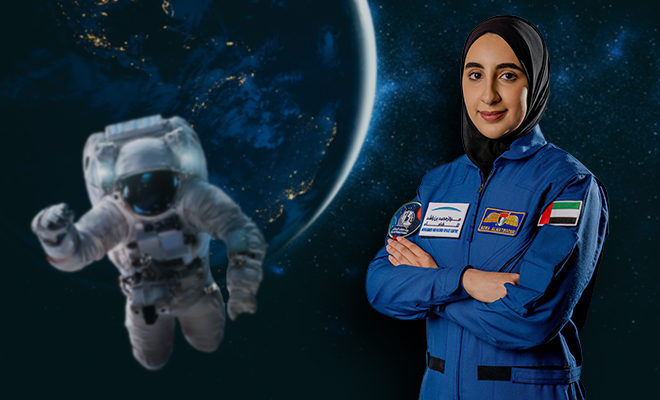 Meet Nora-Al-Matrooshi, First Arab Woman To Train As An Astronaut. This Is Big News!

I have a rather bittersweet feeling towards “firsts” in my life. Not that I ever feel bad for giving something a try for the first time, or achieving something for the first time, but every time a woman conquers a first in any industry especially if it’s a first in the 21st century, it leaves me with a bittersweet aftertaste. Bitter, because women are conquering milestones way too late in the game, and sweet because now that they have, there will be no looking back. As is what we felt when we came across the news of Nora al-Matrooshi, a 27-year-old mechanical engineering graduate, who will become the first Arab woman to train as an astronaut.

Selected by the United Arab Emirates as the first Arab woman to train as an astronaut, Emirati national Nora al-Matrooshi is going to create history with this landmark moment. Working at the Abu Dhabi’s National Petroleum Construction Company, she will soon be seen joining NASA’s 2021 Astronaut Candidate Class in the United States.

In a bid to diversify itself in the  space sector, as the Gulf is expanding its wing, Nora-al-Matrooshi will be one of the few women getting to fly out of the nest and rewrite history.

Also Read : This UAE-Based Entrepreneur Is Going To Pay Salaries To His Male Employees Spouses To Appreciate Their Contribution Through The COVID 19 Pandemic.

Matrooshi is set to be joined by another Emirati, Mohammed al-Mulla under the UAE Astronaut Programme, which also includes Hazza al-Mansouri who became the first Emirati in space in 2019 when he flew to the International Space Station.

Chosen out of 4300 other applicants, Nora was assessed on her scientific abilities, education and practical experience, and then on physical, psychological and medical assessments and after proving to be competent in all of them, her candidature was finalised. And proudly so. With this, UAE also aims at developing its scientific and technological capabilities and reduce its reliance on oil. It is heartening to see that even reserved countries like the UAE, are opening up to see women in such professions and positions of power and change.

Also Read : This UAE Woman Bagged A Guinness World Record For Travelling To All Seven Continents In Three Days.