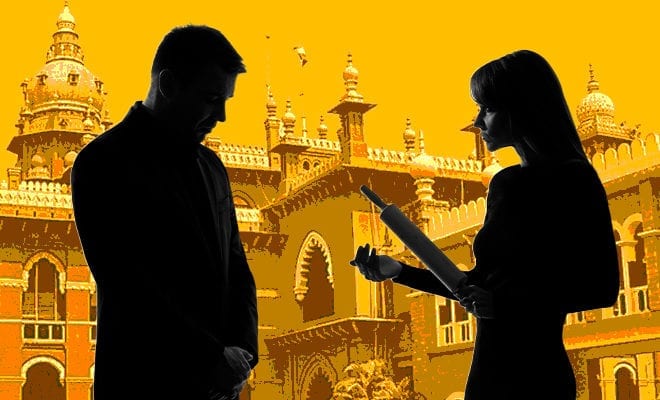 The world we live in complicated because the equilibrium is disturbed and that means the functionality of our society goes off-balance for both sides. Today – and for centuries – our society has been largely patriarchal with many women’s rights still not acknowledged today. Marital rape was not considered a crime, dowry deaths have loopholes that help the perpetrators wash their hands off murder, and domestic violence victims rarely even get the opportunity to seek justice, owing to their limited accessibility and confidence. Naturally, the power is not equally distributed among the genders here and men have been hogging it since the beginning of time. But every now and then, we hear about men who suffer from false accusations and crimes which are more commonly committed against women.

Recently, the Madras High Court observed that it was “unfortunate” that the Domestic Violence Act didn’t come equipped to proceed against a wife falsely accusing the husband.

This was with regards to a petition filed by a veterinary doctor, P Sasikumar who challenged the order of the Director of Animal Husbandry and Veterinary Sciences. He was removed from his position after his now ex-wife filed a complaint accusing him of domestic violence, just days before their divorce.

The present article is an attempt to simplify the nuances of domestic violence and the law governing it to a non legal reader. #DomesticViolence#GenderJustice #Lawhttps://t.co/DNnNbz0KpZ

The bench of Justice S Vaidyanathan observed that “the timing of the complaint clearly shows that she had anticipated the divorce order and created unnecessary trouble to the petitioner.”

It was in 2015 that Sasikumar’s filed for divorce along with a domestic violence case in Salem. He too filed a complaint alleging that his wife treated him cruelly and abandoned the marriage voluntarily. Just four days before the verdict, she sent a complaint to the Director of Animal Husbandry and Veterinary Services claiming that he is accused of domestic violence. After this, Sasikumar got suspended on 18th February 2020 and the next day, the couple was granted divorce.

The court observed that he was falsely accused of domestic violence and the complaint she sent out was out of spite. The court further said, “Husband and wife must realise that ego and intolerance are like footwear and should be left out of their house when they enter the home. Else, the child/children will have to face a miserable life.” Sasikumar could resume service.

The thing is that most women who are victims of domestic violence are already powerless. And real domestic violence cases are far more than false accusations. Many of these abusive men can turn it on the women as they possess more power and it will further deter these women from speaking up. Not having a provision like that is a repercussion of inequality.

ALSO READ:NCRB Data Shows That A Woman Is Raped In India EVERY 16 Minutes. Let That Sink In(Opens in a new browser tab)

ALSO READ:This Man Thrashed His Wife With An Iron Rod Because She Asked For His Help In The Kitchen. This Is Nonsensical(Opens in a new browser tab)