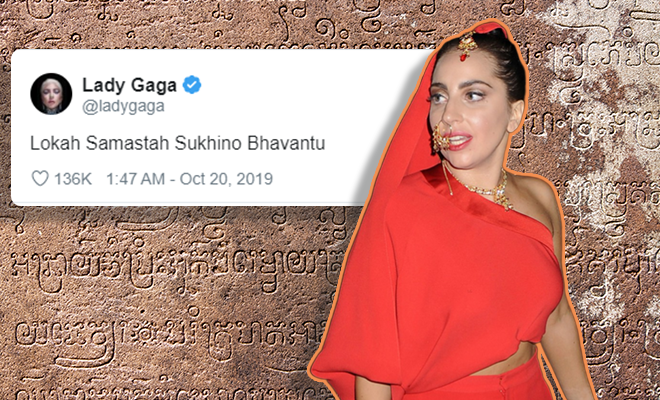 Lady Gaga’s Recent Tweet Was A Shlok In Sanskrit. It’s Sad But Perhaps This Was The Push We Needed?

If you’ve studied from an Indian school, chances are, you’ve been taught Sanskrit as part of a school curriculum. Most of it flew right past our heads but I wish I had paid more attention, because now when I look back, I know I would have such a contextual understanding of our culture. But while we Indians struggle with this classical language, American singer and songwriter Lady Gaga just dropped this tweet and it kind of broke the internet.

It was a rather unexpected tweet, especially coming from Lady Gaga. The A Star Is Born actress recently tweeted a part of a very famous sanskrit shlok on twitter, that said, “Lokah Samastah Sukhino Bhavantu.” The tweet already has thousands of retweets and has been liked by more than 50,000 people – this is the kind of tweet that breaks the internet. It literally trended all day.

Also Read : Nigella Lawson Just Called A Chutney A Jalapeno Salsa And Desi Twitter Wasn’t Having Any Of It

“May all beings everywhere be happy and free, and may the thoughts, words, and actions of my own life contribute in some way to that happiness and to that freedom for all.”

The shlok that means, “May all beings everywhere be happy and free, and may the thoughts, words, and actions of my own life contribute in some way to that happiness and to that freedom for all,” as explained by a user on twitter. With constant re-tweets, some funny, some impressive, some with sudden woke sanskrit enthusiasts, Gaga has certainly taken us back to the olden school day when we’d chant these in morning prayers.

WE ARE ONE & ready to ascend. pic.twitter.com/cIJPpaYIRA

yogi ji after reading this ? pic.twitter.com/BhYaDewTTN

Imagine even Lady Gaga is tweeting in Sanskrit. Surely now we can have a consensus on Sanskrit as a compulsory subject in every Indian school? https://t.co/xnO8qRYlVP

lady gaga did more for sanskrit than NCERT https://t.co/wJfVlvSshs

It probably really means she went to Yoga class today-a frequent saying at end of a session.

And if we’re being honest, the fact that star of her stature has shared words from a classical and ancient Indian language, is kinda cool. We’re losing out on a lot of things we hold dear and while it shouldn’t be that way an international star reminding us of the philosophies and treasures of our culture is perhaps the kind of thing we need to get a conversation started. Like yoga, which needed to go all around the world before we started to see the benefits of it.

Also Read : Lady Gaga Is Launching A Beauty Line On Amazon And We Are Renewing Our Prime Subscription RN!