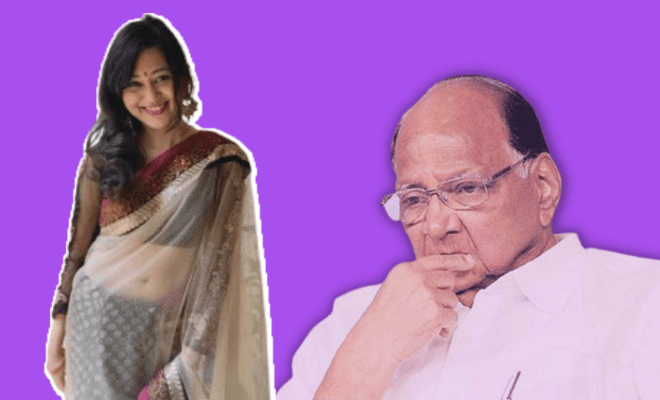 Social media for years have now served as a free space where people – including celebs, politicians, etc. – can openly voice their opinions, thoughts, and feelings. However, in recent times, this very freedom has landed many people into trouble for all those comments that were made. One of them was the Marathi actor Ketaki Chitale. Yep, the actor recently landed into trouble when an FIR was filed against her regarding a derogatory Facebook post she made on NCP leader Sharad Pawar.

Ketaki Chitale in her Facebook post commented on Sharad Pawar, a member of the party that is currently one of the ruling coalition governments in Maharashtra. Though she did not directly use his name, she did end up using words like “80 years of age” and “Pawar”.

In her post, Ketaki Chitale called out Sharad Pawar for allegedly hating on brahmins. She even went ahead and called the former CM a sinner and described him as a “cunning” person. Needless to say, her comments did not sit well with members of his part or his followers.

As per reports, many followers of Sharad Pawar along with members of his party filed a complaint against Ketaki Chitale in numerous police stations across the state. The actor was booked under sections 505 and 153 O of the IPC in complaints filed in Pune, Thane, and Kalwa. She has been sent to police custody till May 18.

As such the political scenario in Maharashtra is that it is ruled by the coalition government of the NCP and Shiv Sena with Uddhav Thackeray as the CM and Sharad Pawar as the leader of the NCP.