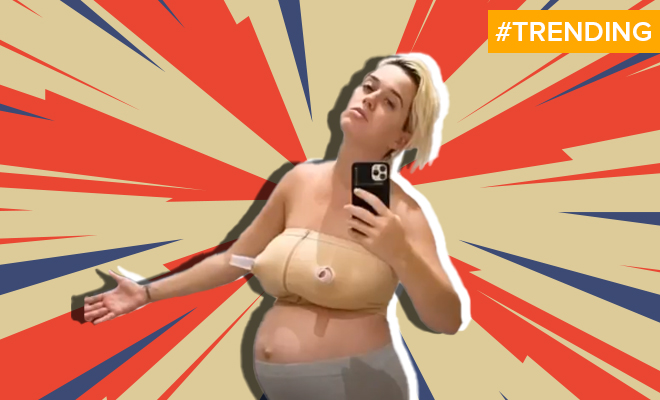 Katy Perry Posted A Picture Wearing A Nursing Bra And Postpartum Underwear. She Is Keeping It Super Real And We Love Her For It

Do you know what’s ironic? Women are treated like baby machines but talking about anything pregnancy related is frowned upon. From breastfeeding to stretch marks to postpartum depression, everything surrounding the concept of pregnancy is highly stigmatized. Agreed, in the last few years, the situation has gotten better with the social media boom. But even now, we only get to see pregnancy fashion and celebrities posing with their perfect bodies after all the pregnancy weight has been shed. But that’s not what this is about, is it? How will we ever destigmatize any of it if celebrities keep airbrushing their pregnancy bodies?

Okay, did you’ll see Gigi Hadid’s pregnancy photoshoot? Absolutely perfect, wasn’t it? She looked like a goddess. But I really wish she would post a candid picture of herself showing off her stretch marks and flaunting that baby bump. All I mean is, more celebrities need to be real and about their pregnancy bodies.

Having said that, I just stumbled upon Katy Perry’s Instagram story and it made my day. As you’ll know, she gave birth to a baby girl- Daisy Dove Bloom (not getting into the name right now), just last week. Today, she took to Instagram to poke some fun at herself and what her post-pregnancy outfit consisted of. She posted a mirror selfie of her wearing a nursing bra and some post-partum underwear and also added the MTV Video Music Awards logo to her post.

You see, this year she ditched the awards but that didn’t stop her from being in the vibe. So, instead of getting all glammed up, she chose to keep it real and show us exactly what a woman’s body looks like a week after giving birth. We are absolutely loving her for this!

Usually, celebrities do not show off their post-partum bodies because well, it messes with their “perfect body” image. But, that is all the more reason we need to normalize this on social media and in mainstream culture. We have become even bigger fans of the Firecracker singer if that’s even possible.

In her post, she credited exhaustion of her hair and makeup and even tagged the brand behind the nursing bra and postpartum underwear she was sporting.

Also Read: From Katy Perry’s Upcylced Clothing To Artworks Replacing Photoshoots, Magazines Are Going Green And We Love It

We live in a world where women are expected to have babies but not talk about what pregnancy does to a woman’s body. I really wish more celebrities would follow Katy’s footsteps and just keep it real. That is the only way we can destigmatize postpartum bodies, stretch marks, breastfeeding and everything else about pregnancy bodies. The thing is, a lot of women will be able to relate way to more Katy’s post than to Gigi’s. Not that I am comparing but you see my point, don’t you?