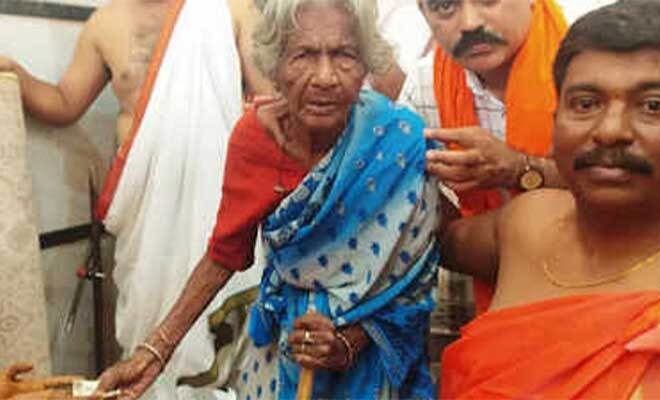 Karnataka Beggar Donates ₹10,000 To Temple, Twice. And Gets Popular For It!

Faith is such a personal thing. What comforts and makes one feel safe is very subjective and that is why I personally try not to be too harsh on someone that might do things differently than me, even if I might not fully understand the situation. So you can imagine how much in awe I was of this old female beggar from Karnataka who donated ₹10,000 to a temple twice.

65-year-old Kempamma was shooed away from the under-construction Pathala Anjaneya temple in Kadur town, Chikkamagaluru district in Karnataka where she wanted to meet the administrators or the priest. When asked to leave, she walked into the temple with determination She ended up being the new popular woman in town as the same people started clicking selfies with her. The reason for this is that Kempamma makes a living begging on the streets and made a donation of  ₹10,000 to the temple.

Priest Dattu Vasudev was surprised to see 20 counts of  ₹ 500 being given to him by Kempamma. Kempamma asked him to use the money to make silver covering for the temple gopuram or tower. This was the second time Kempamma from Karnataka gave a donation to the temple, the last tie being in 2019.

Kempamma, also known as Kempajji is usually seen asleep outside of Kadur Saibaba temple in Karnataka or near a bus terminal.  After her donation in 2019, a temple has been providing her with food. According to TOI, Pathala Anjaneya temple president Mallikarjun said, “Her donation is priceless and it’s the purest form of devotion.” He continued Kempamma made the donation as she has no dependents. She had saved this money for years. The temple will take care of her as nobody knows about her family members or her village and Kempamma doesn’t want to talk about them”

It is heartwarming to see Kempamma from Karnataka being able to support whatever cause she wants, given her age and financial situation. And I really wish the best for those that are helping her out and providing for her.