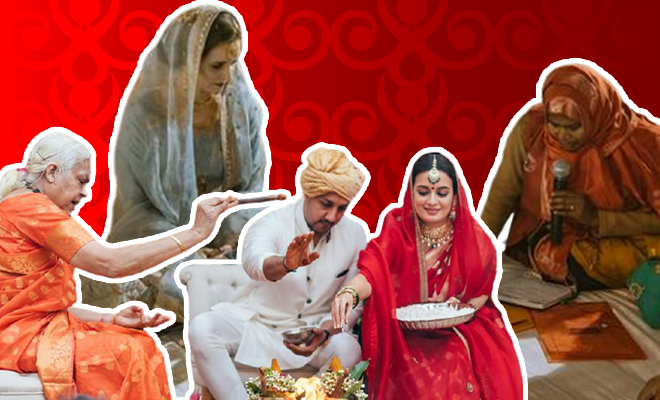 In Netflix’s recent series, The Big Day, one of the brides insisted on having a female pandit to perform the wedding rituals. Pallavi’s demand did seem a little hatke to her family. And why not? Priesthood, across several of the major religions in the world, has been an unrelinquished male dominion. And with that being the case, where would we even find women priests, pandit o Qazi? Well, it turns out, they are very much around, and even though it might take a while to convince your families to break away from tradition, and do some mehnat to find a female priest, the feeling at the end is worth it all.

After all, isn’t doing something different, unique and putting a refreshing spin on tradition for your big day what the kids are doing these days, for the ‘Gram? What’s more unique than shattering centuries old gender stereotypes?

Recently, in actress Dia Mirza’s wedding to businessman Vaibhav Rekhi, a female priest, Sheela Atta, conducted the ceremony. The actress posted a picture of this moment on her Instagram, thanking Sheela Atta and making it a powerful moment for gender equality. In the comment too, people languished praised on the couple’s decision to have a female priest officiate at the wedding, because when celebrities do something like this, it sets a trend for many others to admire and follow.

Thank you Sheela Atta for conducting our wedding ceremony. So proud that together we can #RiseUp #GenerationEquality https://t.co/aMZdyEZRdF pic.twitter.com/BeyFWCSGLw

But if you think that female priests are a relatively new occurrence, then you’re mistaken. They’ve been around for a while now, slow chipping away at the shackles of gender that kept women from officiating religious rituals, one puja and ceremony at a time.

Also Read: Dia Mirza Had A Woman Priest For Her Wedding And We Love How She’s Smashing Patriarchy

In interview with TOI, Bramaramba Maheshwari, a female priest who has been presiding over weddings in Mysore since 1995, said “I have conducted over 2,000 weddings since I became a priestess. When I began Vedic studies in 1988, my curiosity was piqued and I started asking myself, ‘Why can’t women become priests?’ The Vedas don’t differentiate between men and women. Today, so many couples are opting for female priests, and that makes me really happy.”

The article also quoted another female priest, Nandini Bhowmik, who is a Sanskrit professor at Jadavpur University talking about how, for over a decade, she and her all-woman team of priests have been conducting weddings. And one of the best things about these weddings is that any sexist ritual that seems to treat the bride as a commodity whose ownership is being transferred from father to husband, are done away with.

Not just Hindu weddings, but even Muslim nikah ceremonies are getting with this feminist programme and employing women qazis to officiate. Exactly a decade ago, in March 2010, the head of the All India Muslim Personal Law Board’s Darul Qaza Committee said that the appointment of women as qazis is allowed under Islamic law. This happened in the wake of two women—Hena Zaheer and Maria Fazal—being appointed as qazis by All India Muslim Women’s Board, which was founded by a group of Muslim women in Kanpur. Zaheer and Fazal become the first female qazis of Uttar Pradesh and only the second in the country to be appointed thus.

However, things seem to be picking up steam. In 2019, British Muslim Maya McManus married her partner, Bard Of Blood and The Girl On The Train actor Shamaun Ahmed in a ceremony solemnised by female qazis from the Bhartiya Mahila Muslim Andolan (BMMA). The organisation had begun training women to be qazis, which is an office held by men, back in 2016, but this was the first time that one of their female qazis got a chance to officiate a wedding.

Speaking to Al Jazeera, Noorjehan Safia Niaz, the founder of the BMMA, revealed that even the syllabus for the studies of these budding female qazis is carefully curated to not cater to the otherwise misogynistic rituals and principles that usually dominate religious studies. In fact, these women study the Quran from a female perspective and alongside the Indian Constitution so as to make better decisions that are in sync with the law.

One of the biggest advantages of having women priests or women qazis is that they come with quite a liberal mindset. They’re open to changing or entirely doing away with misogynistic practices. For example, in an interview with The Hindu, a second-generation female priest talked about how her mother translated a lot of the Sanskrit mantras into Bengali so that the young couples getting married would understand what was happening during the ceremony. And now she and her team of female priests do the same in English. After all, solemnising a marriage is nothing but signing a religious contract. Shouldn’t both parties know what they are signing up for?

But another reason why couples prefer them now is because they seem to not be judgemental towards multi-cultural or interfaith couples than their male counterparts. What’s more, families are usually a bit rigid about performing certain rituals or adhering to certain customs. And this makes it difficult for the bride and groom that wants to have a progressive marriage ceremony. But when these suggestions or support comes from the priest, that doing away with a particularly sexist ritual isn’t wrong and won’t cause anything bad to happen, the families are more willing to listen and agree.

As someone who has for years worked on developing a very healthy skepticism towards religion, there is one thing that I am absolutely adamant on—religion, or religious texts are in men’s handwriting, not God’s. Eons ago, in Hinduism, women scholars and priests were an essential element of the society, without whom ceremonies wouldn’t be complete. Education was indeed that valued. Male priests couldn’t complete their rituals without having a their wives, also priests, present beside them. In ancient Greece and other civilisations through history, women’s participation in religious ceremonies has been considered indispensable, only to be eventually overridden by men’s need to be the only vessel through which man can reach God.

Over the years, religious rules and guidelines have been overwritten by men (yes, men, not God) to exclude women from performing these holy rituals. They were only supposed to be seated next to their husbands performing the holy task, like a silent support, but nothing else. Add to that women’s monthly menstrual cycles, an entire year devoted to childbirth and the years after devoted to rearing children and running the family home, and there were enough ‘reasons’ to suggest that women priests were not such a good idea. In fact,  women are often considered capricious, temptation inducing creatures who’d stray men away from the path of God, and thereby don’t even find a place in priesthood.

But let’s admit that it’s all a powerplay, and a whole load of poo. Men and women may be different creatures in many ways, but when it comes to being conduits of God on earth or holding religious offices, there really is nothing to say one is better than other. In fact, according to a lot of people who have opted for women priests, they seem to have had a much better experience as well. According to abc.net, many senior housewives are now opting to study and become priests, not motivated by money but simply for the love of the profession and a way of giving back to the society while gaining some confidence in return in their twilight years.

The article also quoted 44-year-old Priti Chandrachur, who pointed out that every time there is a religious ceremony to be performed at home, it is usually up to the women to make the arrangements, from decor to supplies to preparing the food. So why shouldn’t women be allowed to perform the actual ceremony itself? Why should she have to play second fiddle to a man?

We’re glad more and more couples are realising this and opting for women priests for their weddings. Of course, we know that a lot of it is perhaps just a style statement, to make the wedding unique. But if more and more people, especially from the middle and lower-middle classes begin following this trend, it might herald a new beginning.

Women Talk About Female Stereotypes That Are Utter Bullshit