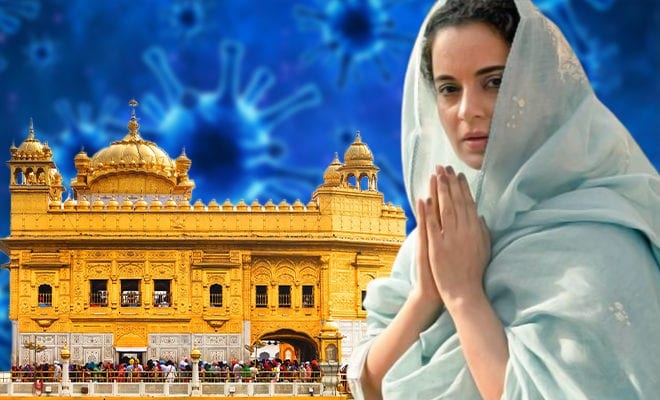 Kangana Ranaut Visited The Golden Temple. Why In The Middle Of A Pandemic Though?

It’s been almost 2 months now since the lockdown was announced in cities like Mumbai and Delhi where the effects of the second wave of coronavirus were widespread and alarming. With a constant rise in the number of people catching the virus, and the statistics of number of deaths constantly climbing up, it was like history wasn’t just repeating itself from 2020, but rewriting a more brutal one. And so, the best way to help one’s self as well as many others, is to simply comply by the government restrictions and stay home. A simple yet crucial step, that seemed a little too out of league for one of our actresses.

Now while the religious ones amongst us would appreciate the sentiment behind anyone wishing to offer their prayers to any deity at this time, it is also imperative to remember the gravity of the situation and not get driven just by emotions. Something someone close to actress Kangana Ranaut should have told her after because she made her maiden visit to the Golden Temple. In the middle of a pandemic.

Posting pictures of her experience on her social media, the actress could be seen visiting the Golden Temple with her nephew and rest of her family. The actress was spotted in a blue suit, and a mask.

She wrote a long caption that read, “Today I visited Sri Harmandir Sahib Golden temple, even though I grew up in north and almost everyone in my family has already visited the temple many times only for me it was first time…. speechless and stunned with Golden temple’s beauty and divinity…”

And even though we understand where she is coming from, we still feel that taking a decision to step out when the situation outside is visibly worsening, was as unnecessary as it was tone-deaf.

Especially since celebrities like her a following of millions of people who may just feel influenced by their actions and consider stepping out too. Other than that, ever since the Thalaivi actress was banned from Twitter, she has been rather quiet. She is said to be spending some quality time with her family in Mandi, Himachal Pradesh right now.

Also Read : After Twitter Suspension, 5 Platforms Kangana Ranaut Could Pop Up On To “Raise Her Voice”