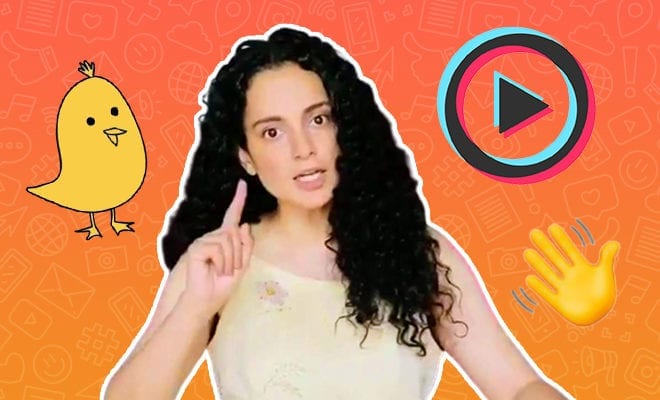 After Twitter Suspension, 5 Platforms Kangana Ranaut Could Pop Up On To “Raise Her Voice”

This has been quite a Tuesday. Woke up to the news of Melinda and Bill Gates getting a divorce. Then moved on to Kangana Ranaut getting her Twitter account suspended for hate speech. And finally, heard that after multiple cricketers tested positive, ruining the social bubble, IPL 2021 was also suspended. Is it Tuesday or suspension day? Now you don’t need to be a data analyst to guess which of the three news items has Indian Twitter rattled. I kid you not, #KahaanGayiKangana is trending right now, as her account lays permanently suspended for everything she tweeted in the aftermath of BJP losing in the West Bengal elections to the Mamata Banerjee-led Trinamool Congress.

I’d hoped they’d suspend the account for her tweets about ‘judicious use of oxygen’. But I guess we can’t get what we want. Not in the 2020s at least. So I will take this small win that we’ve gotten by the grace of the Twitter Gods.

Following the results of the West Bengal elections, Kangana Ranaut was doing her thing, and even asking for President’s Rule in West Bengal. However, one particularly inflammatory tweet about ‘gundai’, the moment she posted, caused major discomfort and outrage. 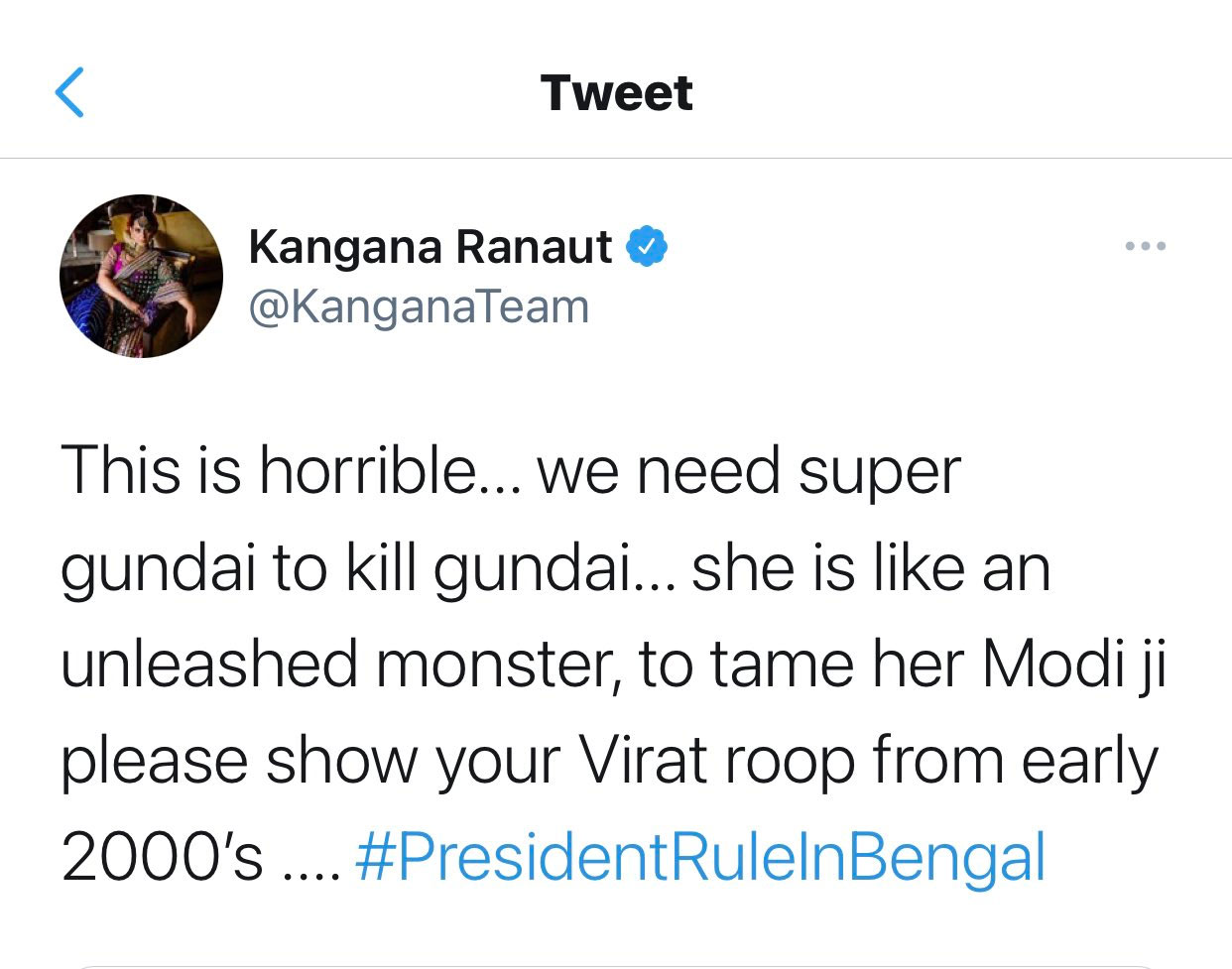 Twitter has issued an official statement on the revoking Kangana Ranaut’s Twitter account. The spokesperson said, “We’ve been clear that we will take strong enforcement action on behavior that has the potential to lead to offline harm. The referenced account has been permanently suspended for repeated violations of Twitter Rules specifically our Hateful Conduct policy and Abusive Behaviour policy. We enforce the Twitter Rules judiciously and impartially for everyone on our service.”

Memes and conjecture followed this decision by Twitter, which isn’t even their first censoring of Kangana Ranaut’s speech. The actor has had her fair share of Panga with Twitter, but this time, the account is ‘permanently suspended’. While trolls and those supporting Kangana vehemently continue to say that she was only voicing the alleged truth about the post-election violence against BJP supporters, there’s no acknowledgement of the fact that her tweets were problematic, instigative and allegedly referred to bringing back a violent event in India’s history.

You live in a bungalow, have luxury cars, walk with Y+ security, carry Christian Dior bags. You have no idea what slavery is.

Don't insult people who have ancestors that actually suffered it! https://t.co/HKCF0KGsit

Kangana Ranaut made the cardinal mistake of reminding you know who about the you know what.

Kangana Ranaut, on the other hand, has issued her own statement, and declared herself as being treated like a slave who’s freedom of speech has been snatched and she has been oppressed. How? Because Twitter belongs to the Americans, who she says, by birth are white people who like enslaving brown people (she means herself).

“Twitter has only proved my point they are Americans and by birth, a white person feels entitled to enslave a brown person, they want to tell you what to think, speak, or do, fortunately, I have many platforms I can use to raise my voice including my own art in the form of cinema.”

Twitter has only proved my point they're Americans & by birth, a white person feels entitled to enslave a brown person, they want to tell you what to think, speak or do. I have many platforms I can use to raise my voice, including my own art in the form of cinema: Kangana Ranaut pic.twitter.com/isGS4QqOQo

But my heart goes out to the people of this nation who have been tortured, enslaved, and censored for thousands of years, and still, there is no end to the suffering: Actor Kangana Ranaut

Right, so Kangana Ranaut has assured us that she has other platforms where she can voice her opinions. And we believe her. Because as you can see, she has a lot to say. It got us thinking, where else, other than Twitter might she find listeners? And if she does, how would she engage with them?

NGL, I think Facebook is her best bet, because that’s where the entire older generation is, which believes the kinda of conspiracy and nonsensical statements that she often tweets. So Facebook is where you can catch ‘em all. But if we want to get more creative and target them young, I’ve made a list of possible options she can explore.

I’m actually surprised she hasn’t migrated here already. This is an India-made version of Twitter, and remember when it began, everyone said this is where they were going to be? Idhar apne hi log gain, Kangana. Go for it.

I am willing to pay Rs.50/- per month to anyone who can take snapshots of Kangana's KOO posts and email to me.

I know Instagram Reels is an option but come on, TakaTak is where the TikTok generation is at. Those ‘liberals’ that Kangana Ranaut constantly slams in her videos are too hipster to leave Instagram and come on TikTok. Ergo, no one will find her content offensive and block them. Best!

This is actually the most perfect app for what Kangana wants to do. For starters, it is an audio-based app. And she loves talking, so this one is a match made in voice note heaven. And second, it is by invitation only, so all those people from Bollywood and ‘nepotism-gang’ that she doesn’t like, she can keep out.

The second wave of Kangana is going to be the worst.

Nope, I don’t mean she should start a podcast. Though that is a good idea, but people might steer clear of it because there is still some level of freedom of choice in this country. Instead, I suggest using Spotify Ads that are absolutely unavoidable, unless you pay money for it. Kangana can use the ‘Me and the band’ format to talk about her favourite political parties.

Besides, huge profit for Spotify, because people might just begin to pay for ad-free music.

Chaunk Gaye? Me too, folks. I thought you use LinkedIn to establish professional connections and share your work or find a job. But a lot of the ‘influenzzzas’ on LinkedIn use it to flirt with women, send marriage proposals even, and share a toxic positive motivational messages that they think only they’ve shared, but in reality, 25,000 other HR personnel and CEOs have shared it before them.

I have this feeling that Kangana Ranaut’s ultimate professional ambition is politics. So why not start building your portfolio on LinkedIn?

I recently came across this old-school but innovative in current times propagation idea employed by the Calangute Village Panchayat in Goa, that is going viral.

I totes think this would be a good platform too. I’d listen.

PS: Of course, this is all in jest. And no, we do not endorse curbing of anyone’s freedom of speech or the incidences of violence in the country. However, writing incendiary content on social platforms that simply serves to generate hate and nothing more, that ought to be unacceptable. People are losing lives here. Can we just show some tact?

Former Doordarshan Director General Archana Datta Lost Her Husband And Mother Within An Hour Of Each Other To The Coronavirus.