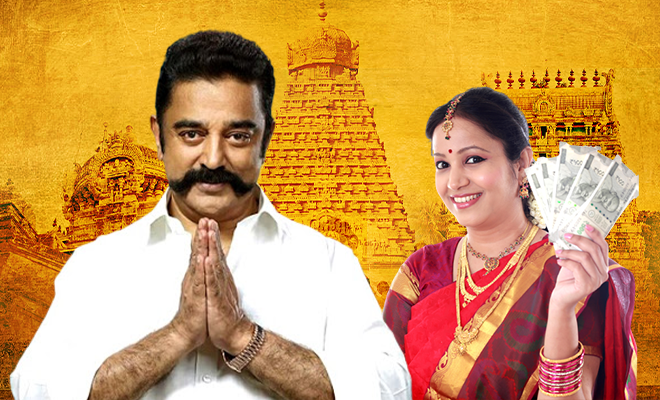 Every time that we come closer to the day of elections, we are bombarded with promises that are openly made, but seldom kept. From ministers trying to convince us into believing every word they say (‘con’ being the operative here), to bills that they will push on the parliament floor but are long forgotten when they’re finally elected, we have been there and seen that all too often, to be fooled any longer. However, we would also be lying if we said we didn’t have tiny bit of a hope, every time an emerging leader recognises the needs and right of women, and promises to deliver on them like Kamal Haasan.

The actor turned politician on Monday, while campaigning for the 2021 Tamil Nadu assembly elections has promised on keeping in mind the status of women and hopes to enable them. He promised, ‘ an assured ‘payment’ to homemakers for their work at home, computer with high-speed internet to all households and transformation of farmers to agri-entrepreneurs.

Sharing this as a part of his seven-point “Governance and Economic Agenda”, Kamal Haasan says that he aims at converting the poverty line into a  prosperity line, and we have to hand it for the guy’s vision and vigour if not anything else.

Also Read : The Tamil Nadu Government Has Taken An Initiative To Provide Free Sanitary Napkins To Urban Areas. We Are All For This

Actor-politician Kamal Haasan's Maiam released a seven-point governance and economic agenda, becoming the first party in the state to release some kind of election manifesto. @xpresstnhttps://t.co/F52aB6nCWU

The agenda of his campaign, as they work towards strengthening women and ensuring they are being paid in full, is, “Homemakers will get their due recognition through payment for their work at home which hitherto has been unrecognised and unmonetised, thus raising the dignity of our womenfolk.”

When we was questioned by the press, whether his vision to provide women with their hardwork’s pay in full was even viable and possible, he responded by saying, “It is definitely possible.” He went on to talk about how by avoiding corruption, the state could be made prosperous. And we don’t doubt that one bit. Along with this, his agenda also scales through providing a computer along with high speed internet to every home and even starting a green plus revolution for the farmers.

Further to this, he also went on to say, “Women will break through established glass ceilings by the equal opportunities provided to them by our MNM government.” Whether or not the MNM government makes good on their promises, we are hopeful to see that the interest and safety of women is being out forward as a legit concern. Here is hoping that regardless of what happens in the elections, these concerns are met and how.