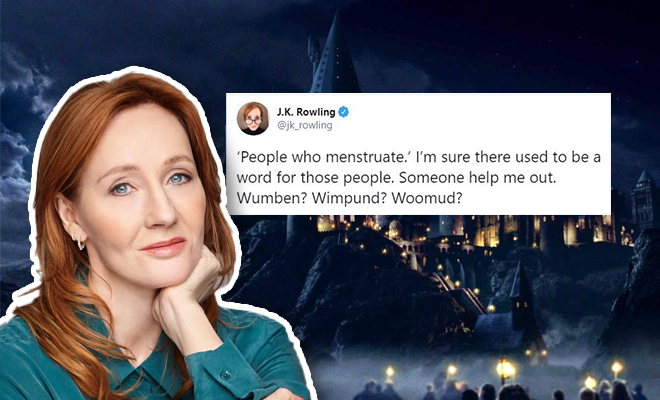 J.K. Rowling’s Transphobic Tweets Are A Disservice To Her Own Work And It’s Got Harry Potter Fans Miffed

I’ve often visualised J.K. Rowling’s career trajectory as a version of HBO’s Game of Thrones series. Like the show, she starts off on a high note with the extended Harry Potter franchise, turning it into one of the biggest phenomena of our time. And then, she self-sabotages it by messing up with the original canon so badly, that fans want her to leave her own creation alone. However, what’s even worse is that after annoying Merlin’s pants off of HP fans by retrofitting the original HP canon for greater representation, she is now poised to Avada Kedavra her legacy on a hill of transphobia.

What has J.K. Rowling gone and done now?

We’re getting too used to asking this question, aren’t we? It all began when Rowling, on Twitter, shared an op-ed that used the phrase ‘people who menstruate’ and got a little snarky with her displeasure that the word ‘women’ wasn’t used instead.

‘People who menstruate.’ I’m sure there used to be a word for those people. Someone help me out. Wumben? Wimpund? Woomud?

The idea that women like me, who’ve been empathetic to trans people for decades, feeling kinship because they’re vulnerable in the same way as women – ie, to male violence – ‘hate’ trans people because they think sex is real and has lived consequences – is a nonsense.

I respect every trans person’s right to live any way that feels authentic and comfortable to them. I’d march with you if you were discriminated against on the basis of being trans. At the same time, my life has been shaped by being female. I do not believe it’s hateful to say so.

Now, it is widely known that this isn’t Rowling’s first time voicing anti-trans opinions. She has apparently been labelled a TERF—Trans-Exclusionary Radical—a woman who believes that trans people somehow threaten her own feeling of womanhood.

The criticism this time, however, was a notch higher, because not only was she unwilling to accept that her stance was transphobic but she was launching this crusade at a time when there are more worthy causes demanding her attention. As you read this, the Black Lives Matter movement against systematic racial injustices against black people is raging across the United States and other parts of the world. As a prominent personality (and white), people felt that she could’ve chosen to amplify this cause over her current stance.

Women are not defined by their periods.

Literally NO ONE said the concept of sex or womxn is erased.

The only thing erased here is YOU erasing the legitimacy of trans folks.

Please reconsider where you stand here, for trans folks and for so many who used to idolize you.

I also want to remind everyone that when LGBTQ organizations generously reaches out to @jk_rowling in December to discuss all this in a collaborative setting, she refused to speak with them.

Here’s a snap of me and my mum. I menstruate. She doesn’t. Not everyone who menstruates is a woman, and not all women menstruate. pic.twitter.com/VOJKacFDu6

What happens when women enter menopause? What about women who had hysterectomies? Women who don't menstruate because of hormonal issues? Are they not women?

Nothing you say stops trans women from being women.

You have power and influence. Why would you do this? What does it achieve? Do you feel like more of a woman when you punch down? Are you threatened? Some trans men menstruate. Why does that affect you? Why do you want to police that?

Celebrities like Sarah Paulson, Queer Eye’s Jonathan Van Ness, Jameela Jamil and Varun Grover also clapped back at Rowling’s anti-trans tweets, and any justification she may have provided for her words.

So book 3 was actually called The Prisoner of Patriarchy.

ALSO READ: DHRUV RATHEE’S COMPARISON OF BLACK LIVES MATTER TO FEMINISM COMPLETELY MISSES THE POINT AND THIS NEEDS TO STOP

And yet, J.K. Rowling’s Twitter has been silent since those tweets. Though we do not know if this is in contemplation of her flawed beliefs or because she has turned Cornelius Fudge and refuses to acknowledge what is right in front of her (HP inside joke, geddit?).

Rowling has enriched countless lives with the magic of Harry Potter. But why the author of the Boy Who Lived brings her controversial opinions to die a painful death under the Cruciatus Curse on Twitter is beyond me and most of her fans. There are many children and grown adults who were ‘saved’ by reading HP during difficult times in their lives. Many, like yours truly, aspired to be writers because J.K. Rowling was such an inspiration to us.

And now, watching her ruin everything that she’s built and turning fans’ reverence into dislike feels like a rerun of GOT Season 8 that nobody wants to watch, especially if it’s in slow-mo. Rowling began by unnecessarily retrofitting character details like ‘Dumbledore was gay and feelings for Grindelwald’ or extolling the casting of a ‘black Hermione’ in Harry Potter and the Cursed Child stage production, all of which turned first-generation HP fans against her. She was even turned into a meme format.

J.K. Rowling: Dumbledore ate the peach from Call Me By Your Name

To this, you add her tone-deaf statements that are literally conjured out of nowhere, and you’ve got a Twitter rep that Hermione wouldn’t approve of.

Honestly, it's amazing that you want this to taint your legacy. That this is something you want people to read on your in a biography about you or on your Wikipedia in 60 years.

Because of this, a younger generation of readers has been finding it hard to fall in love with her books, while the older generation tries desperately to reconcile their feelings for the story. The wizarding world dreamt up by Rowling would’ve never withstood today’s intense scrutiny of political subtext, and the author is only making it worse.

The beloved children’s story is constantly being called out for child abuse, cultural appropriation and even a reluctant acceptance of slavery (house-elves) by its protagonists.

This is an opportunity to learn from your past brilliance: as a white woman, you were were SO close to naming the one asian character “CHING CHONG”, but you took PAUSE & showed magnificent RESTRAINT & bravely named her “CHO CHANG” instead!

The point is, J.K. Rowling does not need to do this. We get it, no matter how much of a billionaire she is or how many book/movies she drops, she needs to stay relevant on the platform that matters. But there are so many other causes that her powerful support could benefit from! Does she have to pick the one that could Obliviate all the good that she’s done so far from public memory? Is she writing these tweets with a Quick Quotes Quill or what?

Endlessly impressed with JK Rowling's world building skills. How do you dream up a world where your imagined persecution by trans people is the most important thing going on right now?! Truly amazing!

What is this Rita Skeeter-behaviour, J.K. Rowling?

Maanvi Gagroo Slams A Fashion Brand For Using Her Picture To Promote A Product That Hides Curves. Why Is This Still A Thing?