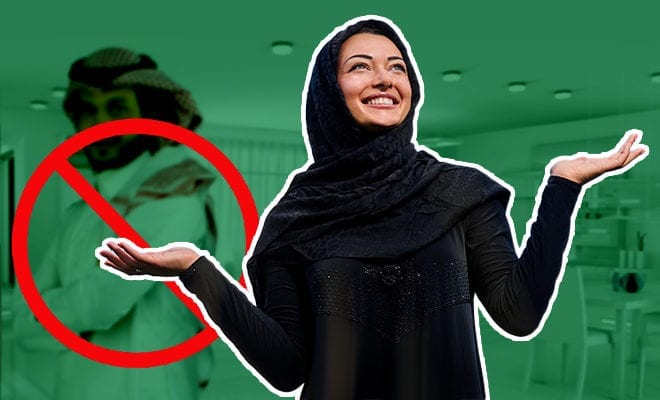 In Saudi Arabia, Women Now Legally Allowed To Live Independently. This Should Come With More Jobs For Women

While the level of oppression and violation of women’s rights varies from society to society, it is existent everywhere. In India, we have assume that gender inequality is a bare minimum in western, developed countries. But that’s not true. Yes, several countries have more liberal laws but did you know France didn’t have a defined age of consent, which led to child sexual abusers to find their way out of conviction? We are struggling in India, with the chains of patriarchy trying to tie us down. But when I hear how women live in Saudi Arabia, my heart goes out to them. It is saddening to know how they don’t have the most basic rights. However, even there, things are changing, rather slowly but they are!

Recently, a landmark decision was passed that will possibly change the lives of the women of Saudi Arabia, that is, if law is supported by the willingness of society. Saudi Arabia has now declared that single, divorced or widowed women can live independently all by themselves in a house without the permission of a male guardian.

This legal amendment led to scrapping of the “Law of Procedure before Sharia Courts” which says an adult single, divorced, or widowed woman shall be “handed over” to her male guardian. Wow, women are looked at like we are cattle or something. The woman won’t even be handed over to her own mother; it had to be a male guardian. But that’s changed now, at least legally.

The new legal text read, “An adult woman has the right to choose where to live. A woman’s guardian can report her only if he has evidence proving she committed a crime.” It added, “If a woman is sentenced to a jail term, she will not be handed over to her guardian after completing her term.”

This is an amazing piece of progress. Congratulations to the women of Saudi Arabia. https://t.co/TuVF1oGoFM

This has come as relief to many women who would rather live alone. It will also help victims of domestic and sexual abuse get away from their perpetrators. “Families can no longer file lawsuits against their daughters who choose to live alone,” lawyer Naif Al Mansi said told a local paper. In 2020, Saudi writer Marian Al Otaibi won a three-year long battle against her family after she got arrested in 2017 under the “absenteeism” law. She had moved to another city against the wishes of her family to escape the abuse of her father and brothers. The court observed she has the right to choose where to live – a landmark ruling, indeed.

ALSO READ: The Crowned Prince Of Saudi Arabia Sent Jeff Bezos A Sexist Text. These Jokes Are Not Okay

While the legal amendment comes as a relief to many, it should be supported with making women financially independent so they can sustain themselves should they choose to live alone. The right to education and employment shouldn’t require permission from a male guardian. And the “religious police” shouldn’t go around creating havoc if women are in employment where they have to interact with men. Limiting them to female-only occupations limits their source of income. The legal reformation will benefit only if it is supported by socio-economic reforms too.

ALSO READ: A Female Rapper Was Arrested In Saudi Arabia For Singing About Women, Their Beauty And Power. So Threatened By A Woman?