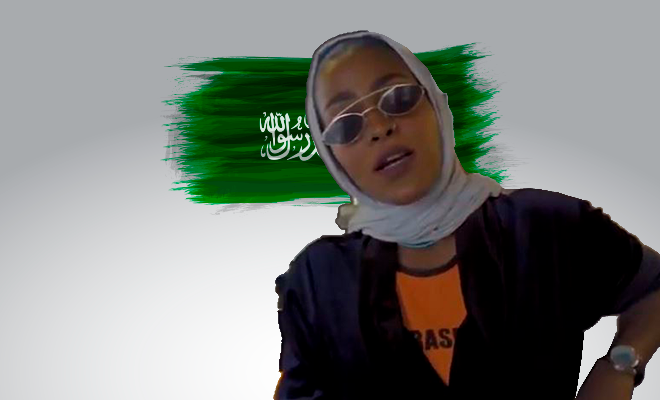 A Female Rapper Was Arrested In Saudi Arabia For Singing About Women, Their Beauty And Power. So Threatened By A Woman?

They say certain professions always come with a certain reputation attached to them. Take writers for example, my parents for the longest time, had stereotyped the profession and equated it to people roaming around in khadi jackets, carrying a jhola and to add to the image, spectacles. Where as in reality, here I am sitting in my fancy labels, I walk around tote bags because they fit my laptop and I have great vision so I don’t wear spectacles. Similarly, being a rapper also comes with a bunch of stereotypes attached with it. One of the major one is that everything is rather explicit. So explicit, in fact, that most parents will get their kids to steer clear of this genre entirely.

Often pegged to be a little too extra, direct and unsuitable for family consumption when it comes to making content or penning down lyrics of their rap, rappers have gained quite the reputation. But as with everything else, there are exceptions. Like this rap by a girl from Saudi Arabia who appears in the video in her hijab.  However, the authorities in Saudi Arabia were none too pleased and ordered the arrest of Asayel Slay, the female rapper who released and appeared in her own music video of the song Bint Mecca (Girl from Mecca).

Arrested on grounds of her song being ‘offensive to the customs and traditions of the holy city’, the rapper who only aimed at making a song that celebrates the women of Mecca for their beauty and strength, was misconstrued. Prince Khalid bin Faisal of Mecca was rather offended and sanctioned the arrest for the rapper.

Also Read : The Crowned Prince Of Saudi Arabia Sent Jeff Bezos A Sexist Text. These Jokes Are Not Okay

The song lyrics go, “A Mecca girl is all you need/Don’t upset her, she will hurt you; With her, you can complete the Sunna [get married]/Your life with her will become paradise,” and we don’t see what went could be seen as derogatory.  The video was taken down from her YouTube Channel while the charges for it being explicit and disrespectful go down. The Prince in a tweet said, “They are not the girls of Mecca. It contradicts the identity and traditions of its esteemed population and his Highness has referred [those responsible] to the competent authorities for investigation and applying penalties against them”

The Mecca regional authorities also tweeted about how the governor has issued orders that Asayel and the video production team for her latest song be prosecuted. And mind you, this is the same song that has smiling kids dancing in the background as backup dancers in a cafe and the woman is only speaking about how powerful and beautiful and relevant women are in this age.

Why is this offensive to their customs and tradition which, by the way,  will even go to the extent of restricting women from even breathing the same air as their male counterparts, we don’t know. Reports claim that the words, ‘Our respect to other girls but the Mecca girl is sugar candy’ is offensive but we don’t know why that would be the case. What we do know is this, this is proof that the nation is in dire need of some perspective and tolerance for it could not even take a song that celebrates the individuality and power of a woman. But this won’t be the first time this is happening either. From banning men from the country on grounds of being too pretty and handsome, to not extending even the most basic rights to its women, Saudi Arabia is a land of missed chances for women, and the arrest of Asayel is proof of just that.

Also Read : Women Were Sexually Harassed At A Music Festival In Saudi Arabia. Sonam Kapoor Posts A Story About How Good The Festival Was. Wow!