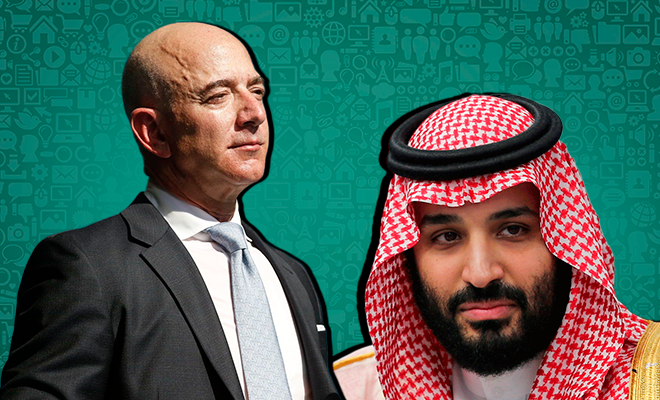 The Crowned Prince Of Saudi Arabia Sent Jeff Bezos A Sexist Text. These Jokes Are Not Okay

Do you know how every family group has this one uncle who thinks he is being “funny” by sending forwarded jokes about how women are so infuriating that men have to find unique ways to either shut them up or just escape? It’s not funny and is downright sexist. These jokes and comments have been going around for generations now and they are disrespectful, but people just seem to laugh it off, which is a ridiculous response to it.

Now that I think about it, this does not happen only in India but globally as well. I mean who knew the crowned prince of Saudi Arabia Mohammed bin Salman or popularly called MBS, was one of those uncles? If you look at this message he sent to the world’s richest man and Amazon’s CEO Jeff Bezos, it gives the same “sexist boomer” vibes.

Yesterday, the news broke that Jeff’s phone had been hacked in 2018 and that a whole lot of data had been stolen by his phone. Investigators believe that MBS was behind this, but that is yet another convoluted saga. What I want to focus on right now is the “conversation” that took place between these two men.

Also Read: Women Were Sexually Harassed At A Music Festival In Saudi Arabia. Sonam Kapoor Posts A Story About How Good The Festival Was. Wow!

Reportedly, Jeff and MBS first exchanged numbers at a dinner party in Los Angeles in April 2018. In May, Jeff receives a malicious video file from MBS and after that, it was clear that his phone had been hacked by some kind of virus that uploaded mind-boggling amounts of data somewhere. Now, we don’t know what transpired between the two, but in November 2018 MBS sent Jeff a ‘sexist boomer’ meme (if you can call it that) about how women can’t seem to shut up.

It read, “Arguing with a woman is like reading the Software License Agreement. In the end, you have to ignore everything and click I agree.” Whatte joke to tell the wealthiest man on earth. It is inappropriate and offensive on so many levels.

The picture that came alongside this caption was of a Russian model, Vika Levina. Reports say she looked very similar to Jeff’s girlfriend, Lauren Sanchez (that he was still married at the time). Investigators think that the “meme” could have been sent as a threat or some kind of blackmail. Or maybe another form of a virus, who knows?

Also Read: Saudi Arabia Lifts Its Mandate On Gender Segregated Entrances. At This Point, It’s Faring Better Than India When It Comes To Women

Whatever the motive behind that message was, why does it have to be so sexist and inappropriate? I mean, aren’t we done with these ridiculous “women are annoying they can’t seem to stop talking” jokes? It is bad enough our relatives indulge in it, the crowned prince of Saudi Arabia sending jokes like these (to the richest man on earth no less) just utterly ridiculous. Can’t say we are surprised in the least. The man is notorious for his human rights violations and journalistic censorpship in his state.

Can we please be done with jokes like these? I can promise you, no one is laughing at them.

It’s So Basic But Let’s Celebrate That Saudi Women Will Be Allowed To Travel Without The Permission Of A Male Guardian!