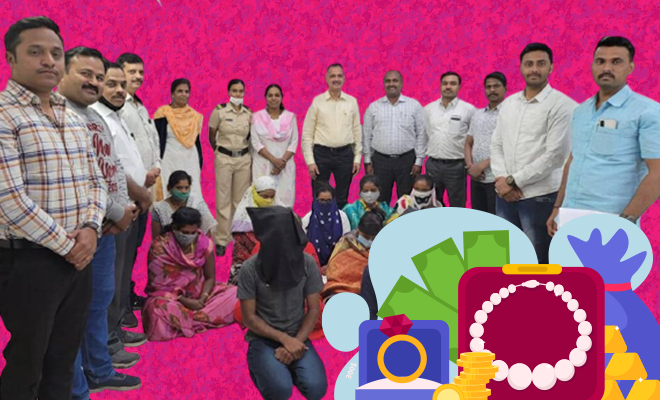 In Pune, Police Bring Down A Gang Of Nine Women Who Duped Multiple Men And Fled With Their Money

If 2020 has taught us anything it’s that letting all your guards down is a huge mistake. My mother always told to me be alert and aware of surroundings. As a kid, I would just nod along. It wasn’t until I stepped foot into the world that I realised how correct she was. We live in a ‘dog eat dog’ world. There’s is no denying that. Especially, with the pandemic causing lay-offs and pay cuts all around the board. It’s really no surprise that con artists are on the rise and just looking in every direction for their next prey. Take this group of women for instance. They cheated multiple men by agreeing to marry them and then running off with their valuables and money. Ah, the oldest trick in a con woman’s book. I would actually love to see a movie based on them.

The Pune Rural Police have arrested a gang of nine women and two men who allegedly cheated multiple men out of a lot of valuables and money. They would agree to marry someone then run off with everything they could get their hands on. The women would take gold, money and ornaments and flee.

The entire racket was brought to light by the police department following a probe into a case wherein 2.4 lakh were stolen from a man right before his wedding in January. 35-year-old Jyoti Patil, who is said to be the mastermind behind this entire operation, approached this man and told him she knew a girl who was willing to marry him. However, later the man’s family members told the police that the bride stole cash and jewellery from the house and fled.

#Pune Rural police have arrested a gang of nine women and two men who are suspected to have cheated men through fake marriages. https://t.co/9zotQ9t3ID

Also Read: In Maharashtra, A Woman Married Three Men In Three Months And Then Ran Away With All Their Valuables. This Would Be A Great Movie Plot

After the gang was brought down, the police found out that the woman who posed as the bride had changed her name. In reality, she was already married and had two children. The nine women were arrested and they confessed to duping at least five men using the same modus operandi. However, the police have reason to believe that a lot more men have fallen into their trap.

The police told Indian Express that, “Jyoti Patil used to find out men who have crossed the traditional age of marriage and tell them about women from poor families wanting to get married. Sums in the range of Rs 2-3 lakh were taken from them on the pretext of giving the woman’s families gold ornaments for marriage. After living with these men for a few days, these women used to flee with ornaments and cash. Women have changed their names for these marriages.”

The police have arrested 11 people in total with connection to this honey-trapping operation. Jyoti Patil, Vidya Khandale (who posed as the bride), Mahananda Kasle, Rupali Banpatte, Kalavati Banpatte, Sarika Giri, Swati Sabale, Mona Salunke, Payal Sabale and two men who are said to be an accomplice to their crimes.

I know that in Indian society, getting married at a certain age is a very essential norm but I don’t get how these men would just let a woman they barely know into their lives. This entire operation is a classic example of why we can’t afford to be reckless and overly-trusting. We have to be very careful, every step of the way.

Man Pretends To Be Woman On Social Media To Con Aspiring Models Into Sending Him Nudes. A New Low Everyday