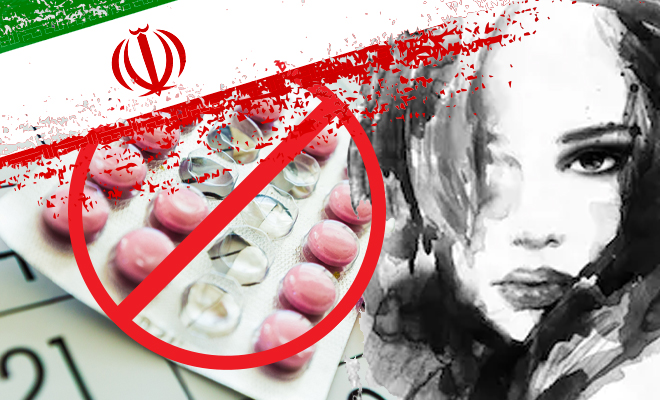 In Iran, Contraceptives Have Been Banned So Women Can Have More Babies. Because Why Give Women Rights Over Their Own Bodies?

If I were ever asked to pick a country that I would never want to go to, let alone settle in , my  answer would probably start and stop at Iran. It is supposed one of the most difficult and prejudiced countries in the world for women, where women’s rights are neglected left, right and centre, but clearly they aren’t comfortable being just that, so Iran has decide to make it worse. From young women being forced into a lifestyle of their parent’s conservative choosing, to them being beaten up and often killed for any sign of disobedience, Iran is the modern day woman’s nightmare. And even more so now, since the country has issued a ban over contraceptives and vasectomy, to boost its population.

According to statistics, Iran is likely to become have one of the most oldest populations in the world by 2050. With one third of the people in the country above the age of 60, it could be a lot of old people and not enough muscle to propel the country forward.. This consistent and rapid move towards a more ageing population will mean that the women will have to give up on contraceptives because they’ve been banned. Because what is choice and all when it comes to women?

Reports suggest that Iran’s state hospitals and clinics are no longer going to perform vasectomies or give out contraceptives to couples, urging them to make more babies. Women who were earlier taught to pay considerable attention on family planning and urged to have lesser children will now find themselves in a situation not of their own calling.

Also Read : In A Shocking Case Of Honour Killing, A Man In Iran Beheaded His Daughter. He Did This After He Consulted A Lawyer About The Punishment.

As women are being reduced to baby-making machines, it is forcing us to think if women would ever be allowed to have a say in anything in their life. All the progress that would have been made by the women in the country, fighting tooth and nail, would all be seen going to ashes, as they’ll find themselves at the mercy of, for the lack of a better term, men who can pull out. From deciding when and where she would marry, to now how many children she is supposed to have, women’s consent and health is constantly being neglected in this culture of male dominance .

Pushing citizens for over a decade now to have more children, by limiting access to family planning services, increasing the number of infertility clinics and telling Iranians it is safe to have children every 18 to 24 months – down from earlier advice to wait three to five years, and even increasing the maternity leave to 9 months for women, the country has now moved on to more convoluted decisions, leaving women with little to no choice.

Guess once again, women are expected to carry the burden of the mistakes of an entire nation, with absolutely no regard to her health and choice. We hope the Iranian government realises the need of giving the women a choice to  put their bodies through this, rather than a force of hand.

Also Read : Two Parkour Athletes From Iran Get Arrested For Posting A Picture Of Them Kissing On A Rooftop. Is That Really A Crime?