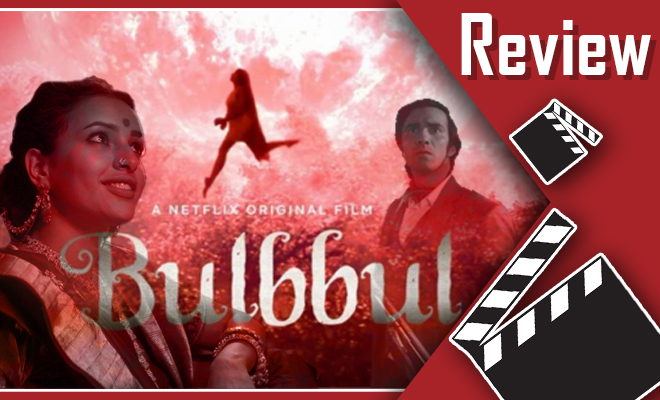 I Watched Bulbbul And While It’s A Great Story, It’s Predictable And Not Scary Enough

My search for the perfect horror movie or series is never-ending. I am always on the lookout for something that looks remotely sinister or has jump scares and Netflix’s Bulbbul was just that or so I thought. When the trailer came out I wasted no time in watching it and already made assumptions about who the ghost was going to be. Initially, I thought it was going to be Anushka Sharma for some reason. My assumptions are almost always wrong. Otherwise, I am good. Ask my ex, if you must know.

This Wednesday, Netflix premiered Bulbbul and I was more than excited to get cozy and watch the movie by myself. I was prepared to carefully go to the washroom at 3 AM because I assumed the movie will make me shit bricks. But that obviously didn’t happen. All my plans were flushed down the drain!

The movie is set back in Bengal Presidency during 1881 when child marriages and male domination existed. A 5-year-old Bulbbul is seen dressed in a bride’s attire is all ready to get married to Indranil (Rahul Bose) who is about 20-30 years older than her. Indronil also has two brothers Mahendra (his twin) – who is mentally challenged and Satya – who Bulbbul thinks she is getting married to because he is almost the same age as her. The innocence of childhood, the beauty of it is shown when Bulbbul is sitting all by herself in her room and Mahendra shows up. He starts touching her inappropriately before Indranil interrupts and asks Mahendra’s wife Binodini to take him away. Bulbbul unaware of what just happened to her brushes away the incident and asks Indronil where her husband is to which he replies “I am him”. This scene sure did send shivers down my spine!

20 years later, Satya (Avinash Tiwari) has made his return after completing his studies in law. And a lot has happened since then. Mahendra was mysteriously killed, Indronil left the manor and suddenly Dr. Sudip (Parambrata Chatterjee) visits often to the manor to check on Bulbbul (Tripti Dimri). Once a docile and shy Bulbbul is now bold and outspoken. So far I am with this movie and have already figured out who the witch is. Yes, you can call me smart, thank you.

Throughout the movie, there are flashbacks of Satya and Bulbbul being close as they are of the same age and practically growing up together. Binodini notices their chemistry and senses the relationship between them even before the two of them realise it. Binodini subtly tells Indranil that Bulbbul has claimed Satya because of how close they are which drives Indranil crazy, because of jealousy. He sends Satya off to London which breaks Bulbbul and she ends up burning the book she had co-written with Satya. A piece of the paper escapes the fire and Indronil ends up seeing both their names are written on it. This was the last straw for him so he picks out his metal rod and pulls Bulbbul out of the bathtub and beats her legs to a pulp. Of course, there had to be an insecure bitch to ruin their lives. And it pissed me off that Indronil was a hypocrite asshole. While he was being jealous with Bulbbul and Satya’s relationship. On the other hand, he was also romancing Binodini. His mentally challenged brother’s wife. At this point, I figure out what a sick bastard Indronil is.

Before leaving, Indronil calls Dr. Sudip who tells him that it will take at least a year for her legs to heal. Hence, his regular visits to the manor. Days have gone by and Bulbbul is in her room trying to recover from the wounds and trauma that Indronil left her with. While resting Mahendra happens to sneak into her room and starts calling her “doll” before raping her and possibly leaving her to die. But does she die? Does she not? In the movie, we are told this but then I would’ve completely ruined it for you, in case you were planning to watch it so I am going to keep that bit aside. So, this guy beats the shit out of his wife, to an extent where the poor thing can’t even walk anymore only because she had feelings for another guy? Why are women not allowed to have feelings? Why are we always told to love, respect and be with one man when the guy is out and about having multiple affairs?

My final thoughts about this movie would be that I love the feminism it promotes. Though the scary element here is not a witch, but instead the men of our society. It definitely has a different angle. You could say that this movie is a lot like a Stree with men being killed, but this witch has her reasons to do so. Even today a lot of women are oppressed in our society, child marriages still exist, women are being raped daily, murdered and so and so forth. This movie is beautiful in its own way. I will definitely recommend watching this movie.

I don’t know what is it but Anushka Sharma sure has a connection with Bengali culture as her previous movie was also set in Kolkata and now this. Regardless of that, Tripti Dimri has amazingly portrayed Bulbbul, I don’t think anyone could have pulled it off with her long mane and sharp features. Avinash Tiwary was like an open book as both his personalities – one of a detective and the other of a sweet sensitive boy was shown. I was in love. Parambrata Chatterjee was as usual a soft-spoken gentleman. Basically the kind of guy who doesn’t exist anymore. And Rahul Bose killed it with the double role. While he did a good job at playing Indranil, I personally think he nailed the role of Mahendra.

Anushka Sharma and her team at Clean Slate always pick movies that have a message to convey and it’s usually about women which we love here at Hauterfly. It’s entertainment that forces you to think. But while the story is amazing, I would have still loved to see some jump scares here and there. And maybe a less predictable story line. Calling a non-horror movie scary is basically playing with the feelings of a horror-fanatic. *Flashbacks to Pari*