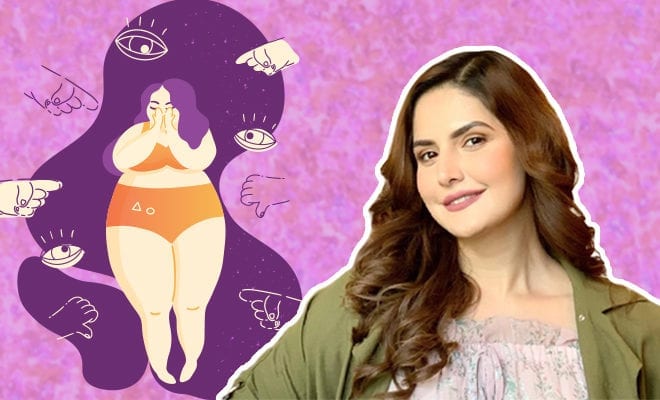 I Was Told To Put On Weight By Industry Insiders: Zareen Khan On Body Shaming

Body shaming is something that every woman has gone through. There is a certain body standard set by people who couldn’t care about health and these are what we must adhere to. A standard that is not only created but also affirmed with every Bollywood movie release. And just like every other woman in society, even the leading actresses of today find it almost impossible to achieve. It is sad but true, that the society we live in values an actress more for her looks than for acting skills. It’s almost like her talent is secondary.

There are very few actresses who have over the years come out and spoken about their struggle with body shaming. It is recently that Zareen Khan spoke about how she faced body shaming after the release of her debut film Veer in the year 2010. She went ahead and spoke about how a major section of the film industry does judge an actress based on their looks. She told IANS, “In the beginning, it was really difficult because of the comparison, my weight was almost a national issue.”

She remembered that after the release of her film, almost everyone was just talking about her weight  – the weight she was asked to put on. Zareen Khan spoke about how she was a lost child that had no knowledge of the film industry or its workings. She said, “When my very first shot happened I didn’t even know where the camera was. I was that dumb and naive. When I am so inexperienced and I am working with such experienced people, they give you instructions. I was supposed to look like that and I followed instructions, and then when the film released it backfired on me. From my looks to my weight to everything, I couldn’t understand what I did. It was funny, it was disturbing. There were too many emotions at one time.”

Having no work at the time was like adding fuel to the fire. But she soon realized that nothing stays the same for long and that “perceptions change with every film and nothing should be taken to heart.”

Even though Zareen Khan has bagged various projects, there are still many actresses who struggle with body shaming. The standards that are asserted upon by Bollywood are not only unrealistic but also difficult to keep up with.

Honestly, it isn’t just our film industry that is to be blamed. We as a society also time and again set up unrealistic standards for our women when it comes to body types. We often hear things like “Who’ll marry you if you’re fat?”, “You’d look so much prettier if you just lost some weight,” “You’re so thin, you should eat more. Men like women with curves.”

And that needs to change. We need to make our women feel more comfortable in their own skin. We need to help them accept who they are whilst accepting them in society as well.