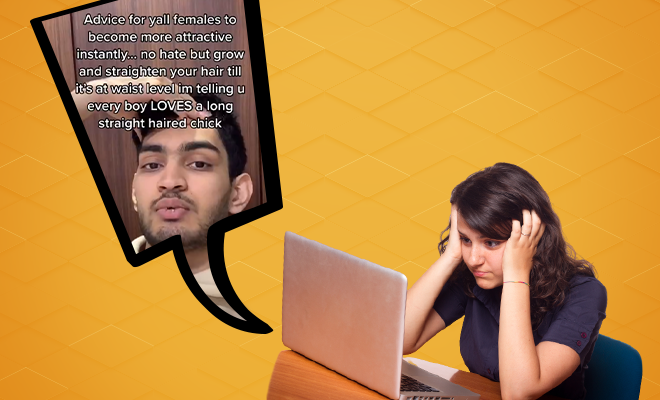 Entitled Guy Shares A Video About His Opinions On What Women Must Do To Look Attractive. Why Does He Think We Care?

Out of the hundred million misconceptions that the men around the world hold, from assuming that they’re born to lead, to thinking they’re entitled to treat women like objects, all of which irk us (women) the same, one that really gets under our nerves is when they go on to explain what a woman should do to look more attractive. Because according to these breed of men, attractiveness is the only thing to measure our value by. And because it gets so confusing for us women, you know given that we have no lessons on how to be attractive to men, this guy hands us a manual. So he tells us, carefully, writing it out lest we get confused how women should have long straight hair, for starters.

Shared by a user on Twitter @dumplinghoee , the user shared a video of a man, where he goes on to say pretty offensive stuff about women.

The video shows the guy, who at this point believes he is doing a favour to woman kind by pulling words out of his ass, and writes in text on the video the words, “Advice for yall females to become more attractive instantly…no hate but grow and straighten your hair till it’s at waist level I’m telling you every boy LOVES a long straight haired chick.”

Always the most crusty assed boys who got a lot of crap to say pic.twitter.com/BW5OPpBuM6

Also Read : This Twitter Thread Revealed How People Still Find It Difficult To Accept Women In Tech Positions. Why The Stereotypes?

Users, just as disgusted and unamused as we were with the video and the crappy content have posted comments like, “What made this guy think making this in a video is a good idea? Also with that face?? The audacity!!”. Meanwhile, another user wrote, “If this is satire, it ain’t fucking funny.” One user also went ahead and wrote (and we love the savegery), “Not gonna listen to his advice when he himself couldn’t do anything to make himself look attractive.”

What made this guy think making this in a video is a good idea?
Also with that face??
The audacity!!

Not gonna listen to his advice when he himself couldn't do anything to make himself look attractive.

It is such men, and their insolence to pass such crass comments, without realising how deeply offensive and unacceptable they are being, that further women objectification. Clearly no amount or length of hair on men can make that ugly a mindset look attractive.

Now we are not sure if this is a satire account or this guy truly thinks we are urgently in need of crappy advice from him, but safe to say, it’s not funny or smart.

Also Read : A Woman On Twitter Said Wearing Hijab Is An Evil Practice, Not A Choice. Millennial Muslim Women Think It’s A Choice Most Women Don’t Get To Make