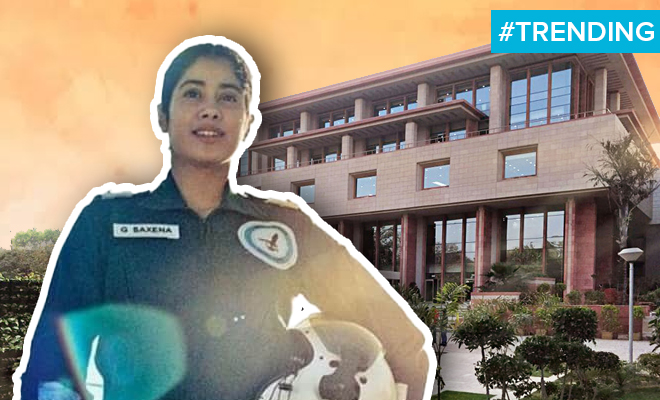 Gunjan Saxena -The Kargil Girl To Continue Streaming Despite Allegations By The IAF Of It Being Gender-Biased. Really Now?

Just last month, the much-awaited Janhvi Kapoor starrer Gunjan Saxena- Kargil Girl released on Netflix. The movie, as you’ll most likely know, is a biopic on the life of Flight Lieutenant Gunjan Saxena who is a former Air Force Pilot and the only woman who served in the Kargil War. She is an inspiration and the makers of the movie did a great job translating her life on the big screen. Of course, they took some creative liberties which seem to have come back to haunt them.

After its release, the movie faced a lot of backlash and came under the scanner for hurting sentiments and denting the good name of the IAF. You see, in the movie they have depicted the gender bias that is rampant within our armed forces. This did not sit well with the NCW, the IAF and of course, the government. There was an uproar about how the movie portrayed the IAF in a bad light and they sought an apology from Dharma Productions and Netflix.

Even other women Air Force Pilots dismissed the movie’s claims as lies spread around for the sake of publicity. I haven’t watched the movie (I do plan on getting around to it though) but considering it’s based on Gunjan Saxena’s story and we have heard countless incidents from the IAF that have gender bias undertones I’d say they aren’t too far off with their depiction. But hey, that’s just my theory.

This matter was taken to court since the centre claimed that it defamed the IAF. However, the Delhi High Court has refused to stay the streaming of Gunjan Saxena- The Kargil Girl on Netflix.

On Wednesday, Justice Rajiv Shakdher of the Delhi High Court asked why the centre was so concerned about the image of the IAF after the movie had been released. He further added that the movie could not be stopped from streaming since it was already available online. The court, however, has asked for a response from Dharma Productions and Netflix. It also sought a response from Gunjan Saxena herself and has issued her a notice.

In today’s hearing, the Additional Solicitor General Sanjay Jain argued that the movie was never shown to a preview committee that had been set up in accordance with the Ministry of Defence’s 2013 guidelines. He said, “In the Air Force we give the highest regard to women. We have been made a subject of ridicule even for countries with whom we are not having friendly relations. IAF’s image has been dented.”

However, senior advocate Harish Salve, appearing on behalf of the producers of the movie argued that the centre’s plea lacked particulars and that gender bias exists in every profession. He said, “There is no organisation which does not have gender issues. Anything said in criticism is not slander. Haven’t we seen it (gender bias) in our profession? You can’t pick four scenes and say slander.”

Just last month, Delhi High Court also disposed of a PIL  seeking direction to modify (or delete) dialogues and scenes from the movie that damaged the image of the IAF. The PIL was filed by an NGO called Justice For Rights Foundation, and it claimed that some of the scenes in the movie were incorrect and misleading. It also stated that several IAF officers were shown as misogynists.

The court’s decision to not put a stay on the movie online seems to be the right one. No matter how much they try to hide it, our armed forces are extremely gender-biased. I mean, until a few years ago women were not even allowed to fly in combat zones. So, yeah the centre can file all the pleas they want against the movie for portraying the IAF as gender-biased but that will not change the truth.

When it comes to women empowerment and equal opportunities, our armed forces are extremely behind. Last year, there was only one female cadet who was selected to join the fighter stream of the IAF along with 40 male cadets from the course. Until very recently, women were not allowed to work for several streams within the armed forces, including combat.

It’s not only our defence forces that are gender-biased. Do you remember the time when a woman astronaut could not go into space because NASA did not have space suits in women sizes? Somethings need desperate and immediate change.

We are glad that Gunjan Saxena’s movie called out the misogyny and gender bias that exists within our armed forces. Maybe the movie does show the IAF in a bad light but that’s only because women do have to struggle twice as harder as men to prove their mettle in the armed forces. Even then they don’t get nearly the same appreciation, promotions or even tenure as the men do. Heck, Gunjan Saxena had retire early because women were not offered permanent commission during her time. It seems like a details that everyone has conveniently forgotten.

Can we just focus on the real problem at hand here? And it’s not how Janhvi Kapoor’s movie portrayed the IAF.