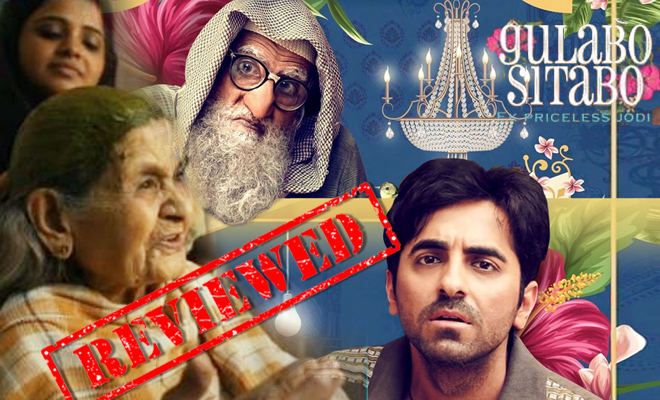 After much anticipation and an elaborate marketing campaign that involved Bollywood stars challenging each other to nail tongue twisters, Gulabo Sitabo has finally dropped on Amazon Prime Video India. Directed by Shoojit Sircar, the film is special in more ways than one. It brings together on screen, for the first time ever, the immensely talented jodi of Amitabh Bachchan and Ayushmann Khurrana. And it is one of the first major Bollywood movies that chose to release directly on OTT, thanks to the coronavirus lockdown keeping cinema halls shut.

The movie began streaming at midnight on Thursday itself, which means hard core movie buffs had already watched it before Friday. It felt nice to wake up in the morning to the familiar buzz of people discussing a new film and sharing their Gulabo Sitabo reviews.

I was one of those enthu-cutlets who gathered the fam in the living room at sharp 12 am so we could partake in this anticipated delight together. But while we were expecting the simple stories, sharp wit and quirky yet endearing characters that one often finds in writer Juhi Chaturvedi’s works, especially in collaboration with Sircar (Vicky Donor, Piku), something just didn’t click.

Gulabo Sitabo has one of these simple, common man stories that you instantly relate to and are amused by. An 80-something man is a proxy landlord for his 96-year-old Begum’s haveli in Lucknow. He has about four-five families living as tenants in the dilapidated excuse of a mansion that has been in his wife’s family for more than a century. He wishes the tenants gone and his senile wife dead so he can claim it for his own. His tenants, particularly one, do not want to pay more rent but want the landlord to fix stuff up. Soon their petty fight gets serious when a lawyer, a real estate bigwig, and the archaeology department of India get involved.

The film has some unique characters in Big B’s octogenarian landlord Mirza, Ayushmann Khurrana’s atta chakki owner Baankey, Brijendra Kalra’s smug lawyer and Vijay Raaz’s bumptious government of India officer. However, while the actors all do what they do best (especially Bachchan in that brilliant prosthetic makeup), it is the writing that is probably not up to the mark and tends to fail them in creating a memorable movie. The film has its moments, and you do appreciate the scattered humour and the folklore analogy of the two warring puppets embedded in the story, but it’s missing that charm, delicious salaciousness of the original folk story, and spark that makes you want to care.

Also Read: Parineeti Chopra Would Hate For Her Films To Release Online And We Agree. Nothing Beats A Theatre Release

That being said, the one thing I am mighty impressed with are the female characters in the movie and the actors who play them. Whether it is the 96-year-old Begum Fatima, played by Farrukh Jaffar, Baankey’s bold and brainy younger sister, Guddo, played by Shrishti Shrivastava, his youngest sister Susheela, played by Archana Shukla, who seems to have a bad case of innocence, or Baankey’s lover Fauzia, played by Poornima Sharma, each of them are individualistic, outspoken and a surprise package in their own way.

The scenes where these women are in the frame, they tend to outshine even Big B and Ayushmann. And that is why, we need to talk about these women and praise them, particularly Begum and Guddo!

Begum Fatima is badass AF, and the most cunning person in the room, even at 96!

Listen, I am a fan. No seriously! This character is a 96-year-old woman, probably of a royal household, is low-key borderline senile and has to be looked after by two caregivers because of her ill health. And yet, she is sharp in her observations, and does not take crap from anyone, including her husband Mirza! She knows exactly the antics that he is up to, but chooses to ignore them as long as he stays loyal to her and the haveli.

However, in one scene, when she realises that he might be trying to usurp the property, she outwits him in such a fantastic manner, you can’t help but laugh out loud! She is the wildcard in this film, and lets everyone think they’re running the show. She may appear to be the feeble, crazy landlady who’s going to conk off any minute, but when the climax comes around, guess who’s going to have the last laugh?

Farrukh Jaffar, who plays Begum’s role, is such a delight to watch. Especially in one of the scenes where she dons sunglasses and enjoys being the centre of attention at her birthday party, she is adorable! A Vividh Bharti radio presenter-turned-actress, Jaffar has worked in movies like Umrao Jaan, and even with all the three Khans—with Shah Rukh Khan in Swades, with Salman Khan in Sultan, and with Aamir Khan in Secret Superstar.

The poor protagonist’s unmarried sister is such a done-to-death trope in Bollywood movies, no? Thank God, Guddo is nothing like that. She is bold, unapologetic, educated, intelligent, and capable of shouldering all responsibilities. Perhaps better than her brother Baankey, who seems to be a little lost in his own self-assertion. Unlike Baankey, she doesn’t advertise her deeds but believes in finding her own opportunities instead of letting her brother find her a groom and get her married off.

The parallels between the siblings Baankey and Guddo are evident. Baankey is the man of the house, while Guddo wants to be one. He has secret rendezvous with his girlfriend at his flour mill; Guddo brings boys (yes, multiple) over at the mansion, for liaisons on the terrace. And when her secret is out, she isn’t unfazed. While Baankey is busy finding a way to save his home, so is Guddo. She manages a lawyer with her knowledge of legal jargon and even gets a job with him. Sure, Baankey isn’t educated like Guddo is, but then he’s got his gender on his side. And Guddo isn’t afraid to use her strengths to get what she wants.

Shrishti Shrivastava does a pretty great job as Guddo, and she’s surely someone you’d want on your team when faced with a crisis.

Fauzia is a realist, knows what she wants and gets it

Okay, chances are, you might not like her all that much. Especially, the boys who think all women are gold diggers and will leave you at the first sign of weakness. It might look like exactly what Fauzia does to Baankey, when she keeps nagging him about how poor he is and why he doesn’t do anything to improve his situation. She even dumps him to get married to a guy who owns a car and can afford to buy her organic atta from the supermarket.

But Fauzia seems a bit more complex to be dismissed as a gold digger. She doesn’t hate Baankey, but wishes that he was more honest with her about his living conditions. She has aspirations, wants a better life for herself and maybe even wants to help Baankey get it. But his male ego and refusal to tell his mother about their relationship leaves her with no choice but to do what’s best for herself. And there’s nothing wrong with that now, is there?

Susheela is pure at heart, and can’t keep a secret!

Youngest of Baankey’s three sisters, this one’s a sensitive and innocent girl, like water taking the shape of whatever container you pour her into. She helps her family fool the landlord when they ask her, is nice to everyone, and thanks to her good heart, unable to lie or keep a secret! Her goof ups definitely add to the funny moments of the movie.

Finally, of course, let’s not forget the woman at the helm of it all, writer Juhi Chaturvedi. This movie might not be up there with some of her best works (October, I mean!). But her writing is inspired and we’re sure there are many more amazing stories waiting to sprout from her pen!

She has definitely delivered the lesson she wanted to with this mildly decent movie—when Gulabo Sitabo fight amongst themselves, someone else swoops in and steals the treasure that was never theirs to begin with!