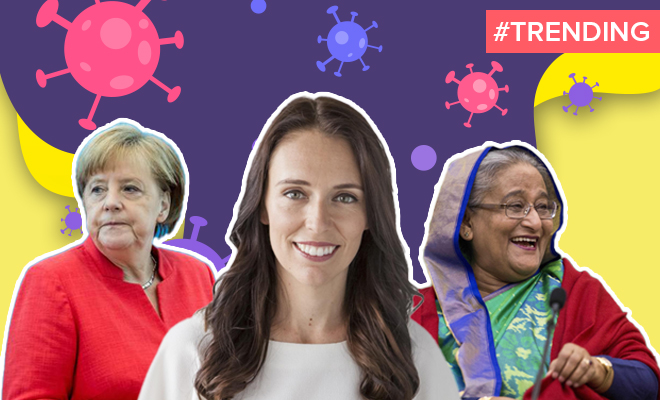 Who run the world? Mostly boys. But some girls have actually managed to overcome gender hurdles and ascend to leadership positions in the governments of their respective countries. And in those positions, they seem to be doing a far better job with leading their country through the coronavirus pandemic than their male counterparts. From New Zealand’s Jacinda Ardern to Germany’s Angela Merkel, Finland’s Sanna Marin and Taiwan’s Tsai-Ing-wen, these national heads have proven that female-led countries are handling COVID-19 way better than those led by men. And no, it’s not just me siding with my side of the species. A legit study conducted by the World Economic Forum with data from across 194 countries has put forth this conclusion.

Two female researchers—Supriya Garikipati of University of Liverpool and Uma Kambhampati from University of Reading—in their research titled Leading the Fight Against the Pandemic: Does Gender ‘Really’ Matter? tried to cast an academic light on what is already being highlighted in the news. The female heads of state have managed to keep the number of cases and resultant deaths under check by implementing policies early on that other male national heads fell behind on executing. It led to the question, were women actually better at handling a crisis like this COVID-19? And if so, why? The study seems to have helped clarify things to quite an extent.

“Our findings show that COVID-outcomes are systematically better in countries led by women and, to some extent, this may be explained by the proactive and coordinated policy responses adopted by them.”

Why have female-led nations fared better?

You could totally read the entire research paper to better understand this problem. A lot of people have raised objections against the hypothesis, from saying that the population size differs, ergo the response also differs. Or that the countries taken into account are richer or poorer, have more gender equality or less parity, or have a better healthcare infrastructure than the others. More importantly, there’s also the sample size issue, considering we don’t really have that many female heads of state in the world. Rest assured, Garikipati and Kambhampati have accounted for all these variables and tried to balance them out as much as possible, to get to an unbiased view.

Having done that, their results indicate that when COVID-19 struck, these women leaders managed to formulate quick responses and implement lockdowns earlier than other countries with male heads of state. Naturally, the speedy efficiency saved their populations from escalating infection cases and deaths.

“Our results clearly indicate that women leaders reacted more quickly and decisively in the face of potential fatalities. In almost all cases, they locked down earlier than male leaders in similar circumstances. While this may have longer-term economic implications, which we cannot test here, it has certainly helped these countries to save lives, as evidenced by the significantly lower numbers of deaths in these countries.”

Now you might ask, how were they so quick to react?

Female leaders are more risk-averse where it matters

Well, it all boils down to how willing they were about taking risks. Then again, it is not that black and white. Think about it this way, when you are the head of a country, no matter what decision you take, you run the risk of having good and adverse effects of it. But it is an unavoidable risk. Ultimately, what matters is what are you willing to risk here?

Now, on the surface, the study suggests that female leaders were more risk-averse when it came to human lives. However, a deeper analysis of leadership literature helped the researchers understand more about the gender differences in risk-taking attitudes. And that brought them to the conclusion that maybe, just maybe, there was a possibility that when the choice was between risking human and risking the economy, female leaders were significantly more averse to risking human lives but were willing to take risks when it came to the lockdown’s impact on the economy.

Male leaders can be a tad overconfident than female leaders

Another study cited by this research examined the confidence and associated behaviour among men and women. It had found that while both men and women can often be overconfident, men are more likely to be overconfident of success in uncertain situations than women. A live example of that would be the way US President Donald Trump has handled the coronavirus pandemic in his country, calling it ‘a war’ and putting forth a very strong, unfazed farce, not even wearing a mask because that would show weakness. He has been certain that his POA is going to work which, alas, it has not, thereby turning citizens against him. Even now, he continues to maintain a façade of control, as he refuses to answer media questions on the deteriorating situation of the nation’s pandemic response.

Female leaders like New Zealand’s Jacinda Ardern, meanwhile, have been vocal and transparent about their policies and happenings. They were quick to shut down international travel and implement lockdowns. As a result, NZ became the first country to be free of COVID-19 and resume normal life. Although a fresh yet subdued wave of cases have emerged in the past week, lockdowns have already been imposed in the cities that reported these cluster infections. Furthermore, PM Ardern has also exercised her powers to postpone the New Zealand general elections, scheduled for September 19, by four weeks. This appears in stark contrast to countries like our very own Indian, which seems to happily carry on festival celebrations and events like the Ayodhya Ram Mandir Bhoomi Poojan.

Taiwan’s President Tsai Ing-wen has not just been in anticipating and implementing measures to protect her people but she has also leveraged technology in the most effective way to do this. Partnering with ethical hackers,  the Taiwanese government built ‘mask maps’ that would tell people the exact inventory of masks in their nearby stores. They even found a fun way of dealing with fake news.

We’re all mighty pissed that COVID-19 has ruined all our plans. Now imagine how a head of state must feel about their national-level plans needing a reshuffle thanks to coronavirus! According to studies cited by this research, men often tend to get angry in a negative situation, which makes them less careful in their actions. Women, on the other hand, when they anticipate that things are going to get worse, tend to exercise caution. If you factor in the fact that women leaders tend to be more empathetic than male leaders, you can understand exactly why female leaders were cautious about the loss of human life and decided to implement early lockdowns in their countries.

Female leaders have empathy and that matters

“… laboratory experiments and assessment studies found evidence to suggest that leadership styles were somewhat gender stereotypic with men likely to lead in a ‘task-oriented’ style and women in an ‘interpersonally-oriented’ manner. Consistent with this finding, women tended to adopt a more democratic and participative style and a less autocratic or directive style than men.”

Basically, this means taking an approach that involves what’s best for everybody, after empathising with everyone’s plight, including the minorities. For example, in March, Norway’s Prime Minister Erna Solberg actually took questions from children about the coronavirus and told them that it was okay to be scared. She even invoked emergency powers to shut down schools in the country.

In conclusion, female-led countries are doing better because…

Because their approach is more decisive and people-oriented than anything. And not in a superficial way that claims to already know what is best for the people. No, this approach is steeped in empathy and actually prioritising people over politics and economics.

“There seems to be some evidence therefore that being risk-averse with respect to loss of lives and having a clear, empathetic and decisive communication style made a significant difference to immediate outcomes of the COVID pandemic in women-led countries.”

Can we borrow a few leadership lessons from these female heads of state, please?