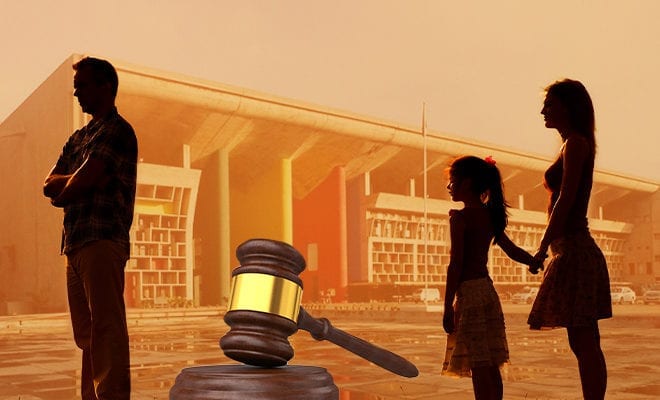 ‘Extra Marital Affairs Cannot Be Seen As Dent On Woman’s Character Or Make Her An Unfit Mother’ Observed Punjab And Haryana High Court.

Sometimes, we hear court verdicts that sound like they’ve been delivered by the judgemental neighbourhood aunty. Brimming with conservatism, the dispensers of justice are often biased by their own social conditioning and questioning a woman’s character. Of course, these never fail to make our blood boil and cause a digital uproar. But today is not about that. Today, we are talking about the observation the Punjab and Haryana high court made in a custody case that honestly seems like a benchmark other courts need to have.

The high court observed that it is very common in our patriarchal society for a woman’s character to be questioned on the basis of skewed morals. “More often than not, these allegations are made without any basis or foundation. Even assuming a woman is or has been in an extramarital relationship, the same by itself cannot lead to the conclusion that she would not be a good mother to deny her the custody of her child,” justice Anupinder Singh Grewal said.

It was the mother who had petitioned the high court seeking custody of her daughter who is at present a little over four years of age. She mentioned that the mother is the natural guardian, according to Section 6 of the Hindus Minority and Guardianship Act, 1956 until the child is under 5. The woman lives in Australia and is well settled there.

However, the husband claimed that his wife and the mother of their child had an extra-marital affair with one of his relatives. He alleged that it was this reason that broke their marriage. He also said that their daughter has been living with him and her grandparents for over a year and is quite comfortable there. The husband said that moving out of country may be stressful for the little girl.

“Even assuming a woman is or has been in an extramarital relationship, the same by itself cannot lead to the conclusion that she would not be a good mother to deny her the custody of her child.”#ChildCustody pic.twitter.com/udiy4nQUN9

The high court didn’t find that the husband’s allegations had a strong foundation. Even if she did have an affair, the high court believed it should not be relevant to the issue of the custody of their daughter. “Modern times are replete with the instances of children raised by a single parent having grown as responsible adults contributing to nation building in various fields,” the bench said. The high court granted the custody to the mother. In fact, the bench believed that since the single mother is well-settled in Australia, it will actually benefit the child to be raised there.

ALSO READ: 48% Of Women Who Have Extramarital Affairs Are Moms, Reveals Study

The bench of justice Anupinder Singh Grewal pointed out that extra-marital affairs cannot be seen as a dent on a woman’s character, making her an unfit mother. Secondly, the bench destigmatised single mothers and observed that she is fully capable of giving her daughter a good upbringing all by herself. This is so wholesome. Only if our society reflected the same mindset!

However, as expected, some people tweeted disagreeing with the observation.

Just wow. Since when is Moral character of party is not considered when deciding the upbringing of a child;on same note will MiLord give custody to a father who is accused(not convicted) in DV case!

ALSO READ: A Woman Having A Relationship Before Her Divorce Is Complete Doesn’t Make Her An Unfit Mother, Says Allahabad Court.