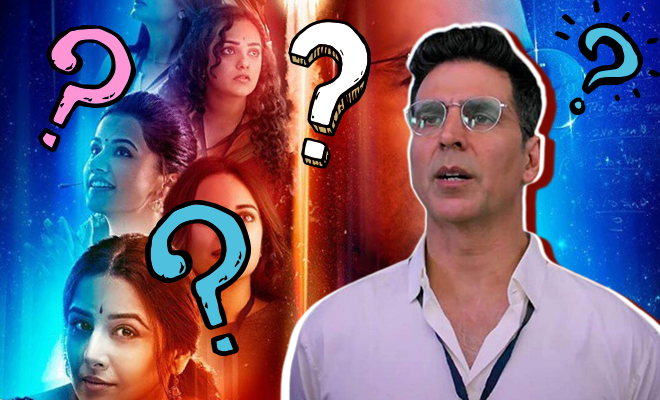 Every Headline About Mission Mangal Crossing 200 Crores Calls It Akshay Kumar’s Film. So No One Is Going To Credit The Women?

At one point in time, Bollywood was about entertainment and good content. There was belief that if the story was good, it would work and box office collections would follow. Box office wasn’t why you made movies. Clearly, that has changed and interesting cinema has now seemingly done a 360 on its priorities. Because now, all it is really about is making it to the 100 and 200 crore clubs, storyline or relevance be dammed. And we say this after having seen absolutely nonsensical movies making it to the top of the list, Kabir Singh, for instance. But while we have disappointing films as one of the highest grossing films of the year, we also have a genuinely good movie like Mission Mangal that has too very recently crossed over into the 200 crore club and we are glad. Except, the only thing that hasn’t gone down well with us is the fact that the only one being credited for it is Akshay Kumar.

The movie, when it first came out with its first look poster, created quite an uproar amongst fans, because of the kind of screen space given to Akshay Kumar in comparison to the all the actresses that were also and an important part of the film. A misstep, that the filmmakers were quick to compensate for, with the release of their subsequent trailers, that finally showed women in the capacity they were meant to be and how it really was during the Mars Orbiter Mission.

Also Read : Mission Mangal Is Mainly About The Indian Concept Of Jugaad. And We Use This To Go Out Of The World Also

In fact, even after its release, it was very obvious that while it may have been Akshay Kumar who tied together the team of scientists for the mission, it was Vidya Balan’s efforts that held them together. The entire team involved got considerable attention during the course of the movie and the power of women was evident. So, towards the end when we see Akshay Kumar giving those women the credit they so deserved and rightfully earned, we sat in the hall clapping and feeling proud of them as fellow women. But nothing of the sort really happened when it came to the reality of the movie’s success.

Now that the movie has crossed over the 200 crore mark and entered the big boy’s league, the only one being credited and celebrated for the success is Akshay Kumar. Be it the headlines, tweets or even statements by others in the industry, all we see trending is that,’Akshay Kumar’s Mission Mangal’ has crossed over 200 crores in 29 days. A feat that obviously he didn’t reach alone, but has no qualms in taking it as though he did.

For a movie that was majorly centered around women scientists who were responsible to turn the fate of ISRO around during that time, it seems rather unfair that a male star should pocket all the fame.Congratulating Akshay Kumar, who we admit is an equal part of the success, while not throwing a shadow of  light on the actresses is as misogynist as it gets and people need to understand it.

It wasn’t just Akshay Kumar’s first 200 crore club movie, it was Vidya Balan’s, Taapsee Pannu’s, Kriti Kulkarni’s and Sonakshi Sinha’s as well. So maybe we must get our facts right and give credit where it’s due. It’s time for us to be petty, and demand that women get equal merit in headlines and otherwise.

Also Read : Yeh Sindoor From Mission Mangal Celebrates The Powerful Women Of India And We Love It!

Is He Taking You For Granted? Take This Relationship Quiz To Find Out!