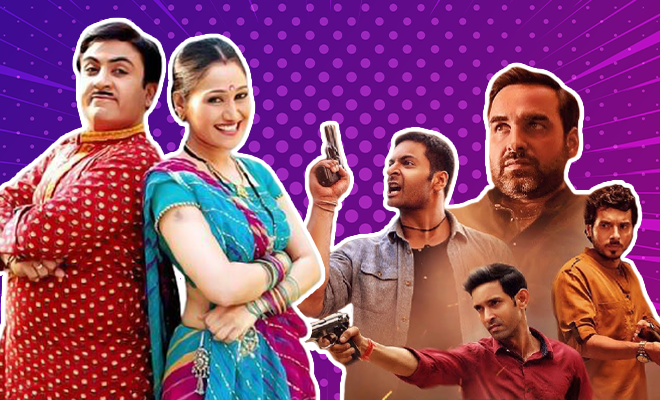 A few years ago, when OTT platforms like Netflix or Amazon Prime Video (among many others) came into existence, we could have never imagined that in just a little time, it would become absolutely impossible to imagine life without an account on such platforms. From Sacred Games to Mirzapur to Money Heist, we were suddenly exposed to a whole new world of content that became an instant hit among the people, primarily because of how it struck a realistic chord with all of us. A thought that is now being contrasted by Dilip Joshi of Taarak Mehta Ka Ooltah Chashma, who is unimpressed by the language often used in shows.

Headlining the famous and beloved show on television, Taarak Mehta Ka Ooltah Chashma, Dilip Joshi who plays the role of Jethalal Gada, has recently dropped some serious statements, dismissing the culture and content that is viewed on such OTT platforms, calling them out for their excessive use of expletives that according to him is corrupting our Indian traditions.

In a podcast with comedian Sorabh Pant, Dilip Joshi said, “On OTT platforms, we can see some mind-blowing work. There are some great performances. But I feel that there are a lot of expletives used when they are not necessary.” He went on to point out, “If you want to show reality, then also show people going to the toilet and taking a bath. What you cater to the audience, matters. What you see, remains with you. Do you want to create a society in which people talk only using abusive language? There is a limit for everything. If it is within limit, it is enjoyable. If it goes beyond limit, it starts troubling you.”

Also Read : Bihar CM Nitish Kumar Asks For Censorship Of OTT Content Because It Leads To More Crimes Against Women. We’ll Blame Anything But The Criminal

Not stopping there, Dilip Joshi then went on to criticise such platforms by accusing them of ‘blindly following into the footsteps of the west’. He said, “I can understand that you need to change with time and evolve. Lekin kya gaali dena aage badhna hai (Does using bad language mean progress)? Whatever is happening in the West, you want to do that here. The west is looking at the culture of the east. Our culture and traditions are the oldest. We have so many amazing things in our culture and without knowing that, you have to blindly follow the West. In their culture, they use the F-word a lot and so it doesn’t seem unnatural in their shows and content. It’s not that here. Do you talk to your parents like that?”

Now while we are ready to acknowledge the abundance of crass and bold content on such platforms, what we don’t understand is since when did realism start offending people and their culture? This coming from the actor who has been playing the role of a protagonist in Taarak Mehta Ka Ooltah Chashma, a show that has been blatantly accused of furthering stereotypes, colorism (all the jokes on Iyer’s skin colour and his coupling with the fair Babita) and even promoting infidelity, considering Dilip Joshi’s character Jethalal is repeatedly caught on script trying to flirt with a married woman. Hypocrisy much? We think so too.

With shows and movies releasing on platforms, they are subject to much less scrutiny from critics and sensor boards, which allows them to tap into the kind of content that has earlier always been rejected. And just because our society isn’t acquainted to watching it, doesn’t mean it still doesn’t hold a mirror to our society. It is about time we develop a thick skin to content that is much closer to reality as opposed to the kind of movie and tv shows with fairytale endings and unrealistic scenarios.

Besides, why does Dilip Joshi think we only want to watch content that is family friendly? It is okay for every show to not be PG 13 or not be something you watch together as a family. As times are progressing, so are people’s choices in consuming content, and even if you don’t understand it, you don’t have to dismiss it.