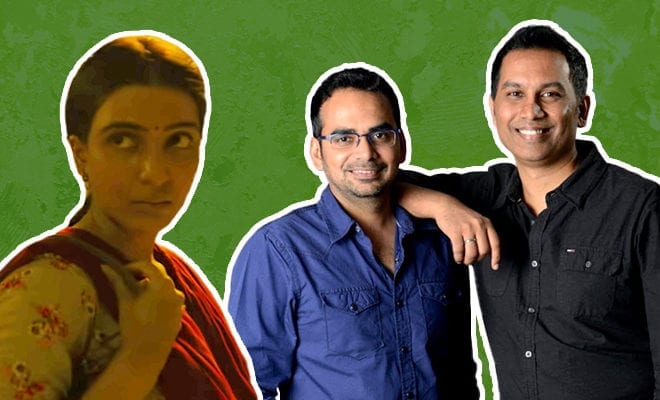 Creators Of The Family Man Claim Fans Are Asking Why Samantha Akkineni Isn’t Beautiful In The Show. Ugh

As much as it is always interesting to see actors try on different hats, take up roles that aren’t just all glitz and glamour, but more realistic to our life, what isn’t interesting is seeing them do it all wrong. Case in point Hrithik Roshan in Super 30, Alia Bhatt in Udta Punjab and now Samantha Akkineni in the second season of The Family Man where she would be seen playing Manoj Bajpayee’s nemesis, Rajji. And while all of that is still okay, what isn’t is the fact that she’s been portrayed two tones darker than she is and this has been touted as her ‘deglam’ avatar.

Recently in an interview with the creators of the show Raj Nidimoru and Krishna DK, when they were asked about Samantha’s role in the upcoming season of the show The Family Man, Raj went on to say something that didn’t just sit right but was also rather controversial. He said, “Samantha’s choice of doing The Family Man 2 is an extremely risky one, especially if you see how passionately her fans follow her work.”

He went on, “Already there are few comments saying, ‘What did you do to our beautiful Samantha?’ I said she is still beautiful, in just a different role. Someone like her doing this role is very risky. It is brave to say, ‘I am going to let go of all the things people look in me, in my character and I will embrace a completely different, contrasting character and try and do my best with it.’”

Family Man 2 makers on Samantha Akkineni: She took extreme risk to do this role, it is a brave choice.
.
.#TheFamilyMan2 pic.twitter.com/OJrb8Dg5gY

And honestly, we didn’t know what was more problematic, the fact that Samantha was asked to be playing a ‘brown faced’ role or the fact that the role was tougher just because she wasn’t playing her pretty usual self. You see because for a woman from a country that is dominantly brown faced, that is a rather worrying perception.

And just like that, in a simple statement the unrealistic beauty standards of the industry were once again made apparent, as well as the fact that for the industry, translation of playing challenging roles for women is often reduced to them simply looking different and not acting different. Because vanity, as much as it may be important is not the only essence of an actor.x

Samantha was chosen for the role after the creators came across her work in the film  Super Deluxe and decided to take her for they also needed an actor who could speak in Tamil and possibly understand the fabric of the character they were building. The show is supposed to go live June 4 on Amazon Prime Video.

Read more : Samantha Akkineni Used To Have Sleepless Nights Because Of Trolls. But Not Anymore, Now She Laughs About It