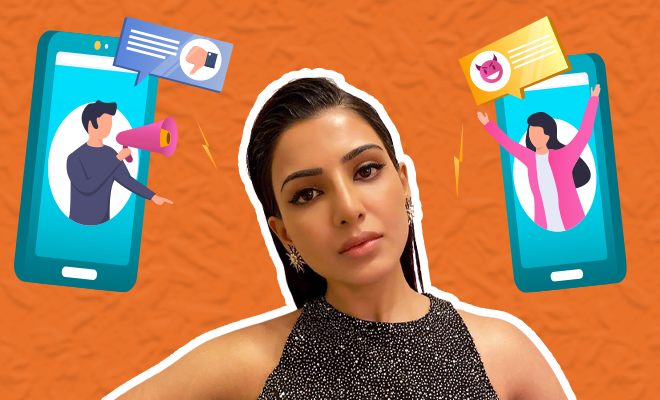 Samantha Akkineni Used To Have Sleepless Nights Because Of Trolls. But Not Anymore, Now She Laughs About It

With the kind of work I do, I am often subjected to a lot of hate or arguments for my feminist views. And that’s okay, if we are going to disband patriarchy every day, we shall do that. Which is why a mean comment here and there don’t bother me.  I’ve grown a thick skin to the harshness, but back in the day when I was just starting out, I remember being disheartened all too easily every time an anonymous troll would talk down to me. A feeling that actress Samantha Akkineni could relate to, as she recalls her sleepless night because of trolls.

The south actress and superstar, Samantha Akkineni who will be seen making her debut on the OTT platform with a gripping role in the second season of hit show The Family Man, alongside actor Manoj Bajpayee, recently opened up with the experience she had while dealing with trolls all her life.

Sharing her experiences on a a fun ‘Ask Me Anything’ session on Instagram where she was openly answering all sorts of questions from her diet to her routine to her skin care, favourite movie roles and more, it was when one user asked her about trolls that she talked about how she has handled them previously.

Also Read : Fans On Twitter ‘Protecting’ Anushka Sharma From Trolls And Nazar After RCB Loses IPL Match Is All Heart!

She said, “Strangely, they don’t affect me anymore. They used to give me sleepless nights but now, I laugh actually. I guess that just goes to show how much I have grown as a person.” And to see her grow, not just in terms of having a thick skin in enduring crass comments, but also knowing better than that and rising above, is perhaps the best thing.

The actress has time and again become the butt of severe social media trolling, sometimes for her posts, other times for her choice of clothes or captions, but the actress has always dealt with them like a boss, and even given it back to the trolls that feel entitled in expressing their unsolicited and nonsense views.