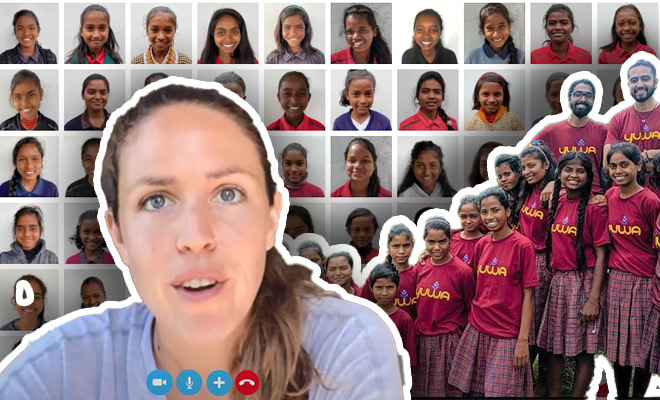 Yuwa School In Jharkhand Has Made Online Classes Possible For Its Students. Education Cannot Wait!

As a student, the transition from physically attending university to online classes has been fairly smooth, as I’m sure it’s been for many of us. We were already used to working on our laptops and phones even before the lockdown, and that’s a huge advantage. But while we’ve gotten used to the routine of studying from home and submitting assignments while giving online exams, there are others in our country who haven’t had the same privilege. Online classes are simply not an option for a large number of students. So for them, the school year has basically been put on an indefinite hold.

However, this girls school in Jharkhand has decided not to let anything get in the way of making online learning possible for their students. They’ve started the new academic session in the first week of June as planned and how.

With the ongoing pandemic, having classes at school was out of the question but the administration of Yuwa School, Jharkhand did not let that come in the way of teaching young girls who have fought for an education. @MendraDorjey's report.
Read more: https://t.co/AC52jZV5gr pic.twitter.com/MWjs8apYPB

“At Yuwa School, we have girls who have fought to be in our school. Who have advocated for themselves, who have stood up to their families. They want to be there everyday and that’s why I believe that this distance education is going to be possible, because our students have the will to do it,” Principal Rose Thomson Gastler told The Quint.

Also Read : A School In Karnataka Filed A Complaint With CID After It’s Online Zoom Class Was Hacked To Use Obscene Language. This Is Getting Out Of Hand.

But this was no easy task for the school to pull off. Almost none of the 95 girls who were a part of the new session had a mobile phone of their own. With only a handful of students having access to the internet and a device, how would this system work? Here’s the solution they worked out:

“We have multiple students who are sharing the same device. We have some students who only have access to a mobile phone and late in the evening so we can’t say ‘Okay, from 9 to 10 we’re doing science’ because not all students are going to be able to keep a schedule like that. So, teachers send out the daily content and assignments in the morning and then give students the freedom to make their own schedule throughout the day.”

Jharkhand’s COVID-19 cases are close to 2,000. But the school was clear that waiting it out was not an option. It was important for classes to begin. And with a little bit of effort, planning and precaution they’ve made it happen just right.

“Yuwa represents almost like a second family. It’s a really important community for them that helps them to built up their sense of self and form ideas and plans about what they want to do about life. Whereas at home, they might be getting a different message that, ‘You’re a girl, your role is to become a wife and a mother and we would really rather see you get married after you finish 10th,'” Rose explained.

Yuwa School was founded by Rose’s husband Franz Gastler in 2009. The initial effort was to bring young girls from the village together through football. The school’s first batch of students graduated this summer. Seven of nine women have been accepted into universities in the US.

“Funding is our biggest challenge right now. Our best partner had planned to give Rs 1.1 crore in funding this year. Now, all that funding has dried up. So, all of that 1.1 crore has been cancelled. We’re scrambling just to try to keep on paying our teachers salaries and keep on giving scholarships to our students,” Franz said.

Girls education in India is an issue that has only worsened during the pandemic. So many students in remote parts of India don’t have access to the internet and hence cannot make the transition to online classes. It is when people like Franz and Rose Gastler go the extra mile that it becomes possible for these students to make the most of every learning opportunity. We wish the students of Yuwa School all the success for their new session!