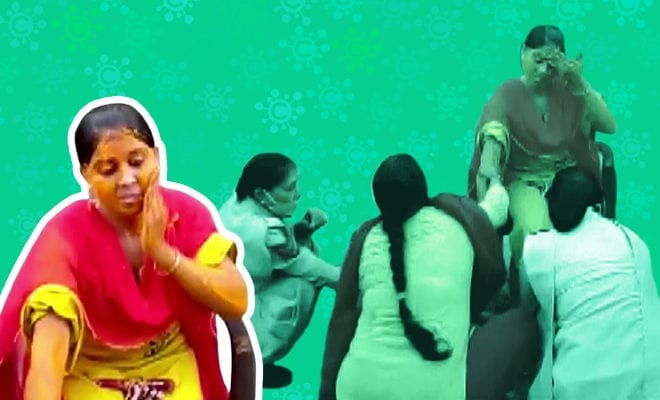 Constable Asha Roth Hosted Her Haldi Ceremony Her Police Station After Her Request For Leaves Got Denied!

Believe it or not, but one of the hardest things I’ve ever had to do at my place of work, was actually ask for a day off. Blaming myself more than the system, for I am the awkward kind who starts sweating the moment I have to ask for something even something that’s completely normal, I struggle to ask for leaves.  There have been times I have worked through some really important days of my life, simply because I thought I wouldn’t be allowed to take a leave. But providing me with some inspiration and a whole lot of creativity is this female constable, who when denied leaves from work, came up with a damn good way around it. She hosted her haldi in the most unique way.

Asha Roth posted at Kotwali police station recently went viral on the internet after she decided to turn a sour situation in her favour by thinking quick on her feet and adding creativity to arrive at a solution. As her wedding was approaching, Asha Roth who is constable at the Kotwali station, decided to put in a few leaves for the ceremonies.

However, due to the current pandemic situation where the government needs all hands on deck, her request for leaves was denied. While most of us would simply either take an unpaid leave, or perhaps postpone the wedding to a more favourable timing. Asha decided to take the third secret option, which was to hit two birds with one stone. She decided to show up to work, only to have her Haldi ceremony conducted at the station itself!

Also Read : This Kerala Couple Got Married In A Government Hospital Because Where The Groom Was Covid Positive

Rajasthan: 'Haldi' ceremony of a woman police constable who is posted at Dungarpur police station was held at station premises, as couldn't avail leave amid surge in COVID19 cases. (23/4) pic.twitter.com/S1KoKc99yB

In a video that has gone viral and shows fellow female police officers joining in and putting haldi on Asha as part of the ceremony, one can even hear traditional songs being played in the background, as the bride-to-be can be seen seated in a chair and soaking up the festivities.

Patrika reported that the constable’s wedding was scheduled to have taken place last year, but because of coronavirus, it got delayed by a year. And even though the second wave this year hasn’t made the situation better, only worse, Asha still tried to find a way to make it work by holding her haldi ceremony in a unique way!

The station-in-charge Dilip Daan also commented on the matter and shared that since the  auspicious ‘Muhurat’ could not be rescheduled, they decided to host the haldi ceremony there. And as an early wedding gift, her leaves for the wedding were later approved.

Also Read : This Newly-Wed Indian Couple Used Their Wedding Fund To Donate 50 Beds And Oxygen Cylinders To A COVID Centre. What A Lovely Gesture