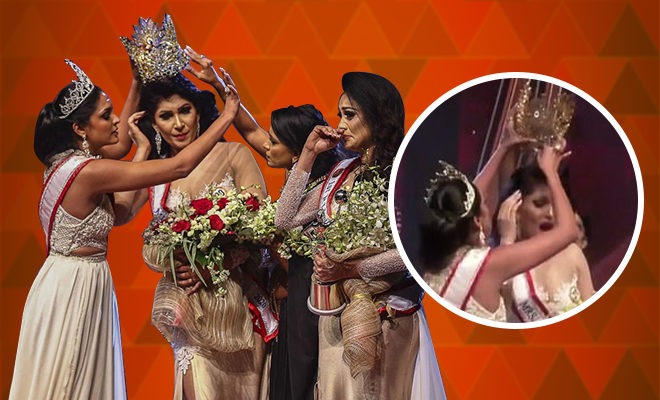 Pageants according to me and up until recently were all about beauty and poise but not much else.  And while most of the times such pageants get accused of feeding into unrealistic beauty standards of society, which they do, this is the first time that they have been accused of some OTT drama, after a pageant queen was injured after her crown was forcefully removed from her head onstage by a former winner. We don’t get why there needed to be such aggression but okay!

Captured on live television during a broadcast ceremony, the event was about crowning Pushpika De Silva  the 2020 winner of Mrs. Sri Lanka. However, it was during the crowning moment that something rather unanticipated happened. Snatched away by Caroline Jurie, former winner of the pageant in 2019 and the current reigning Mrs. World, Pushpika De Silva’s crowning moment and thunder was stolen by Jurie as she cited a rule that prevented women who have been divorced from winning the title.

In the video that is making rounds on the internet, the entire fiasco has been captured on video and Jurie can be heard stating that, “There is a rule that you have to be married and not divorced, so I am taking my first steps in saying that the crown goes to the first runner-up,” moments after she snatches the crown from De Silva’s head and puts it on the runner-up.

Not only did this very weird moment look horrifying and made us cringe, but the antics that Caroline Jurie pulled off on live-television, hurt Pushpika De Silva in the process, the winner claimed. Both physically, and emotionally.

In a Facebook post, Pushpika made a statement as she wrote about her “injuries to my skull” and went on to say, “As I write this, I responsibly say that I am not a divorced woman,” she wrote in a statement translated from Sinhala. “If I am divorced, I challenge them to submit my divorce papers.” She further wrote, “So, even though that symbolic crown has been snatched from my head, I would like to inform you that I have already taken the necessary legal action for the injustice and insult that has taken place.”

Ending her statement by writing, “a real queen is not a woman who snatches another woman’s crown, but a woman who secretly sets the other woman’s crown!!” Pushpika made her sentiment about the entire incident pretty clear. Whether or not the claim about her being divorced checks out, it was rather uncalled for, for a reigning Mrs. World to resort to pettiness and insult Pushpika on the stage.

Also Read : This 20-Year-Old Is A Hijab-Wearing Beauty Pageant Contestant