An 11-Year-Old Autistic Jiya Rai From Mumbai Sets A World Record For Swimming 14 Kms In 3 Hours And 27 Minutes. We Are So Proud! 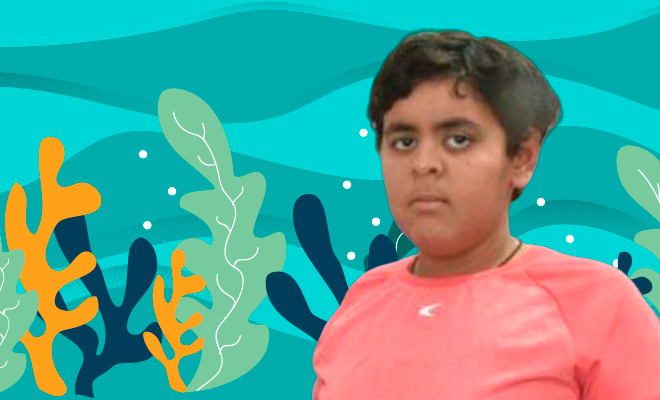 Coming to work on most days for me is equivalent to coming to an influx of horrifying crime stories or perhaps stories about how the world that we live in is still so prejudiced and stereotyped against women. Needless to say, after that, my morning moods are usually always blue. However, every now and then, when we do come across news of just how well women of this country are doing, despite the world pulling them down. Those are the moments that make the rest of them all worth it. And seems like this is a moment just like that. With women breaking past the patriarchal notions of the society to reach the moon and soar to even greater heights, we have an eleven-year-old Jiya Rai doing just that and giving people a run for their money, by breaking records in swimming.

As the 11-year-old autistic Jiya Rai leaves us feeling proud and surprised by setting a new record of swimming all the way from Elephanta caves to Gateway of India, covering a distance of 14 kms, we can’t help but find another reason to beam with happiness, for the kind of ways talent finds and hones itself. A distance that was touted to be covered in 4 hours and 21 minutes previously, was outdone by this 11-year-old in a record time of 3 hours, 27 minutes and 30 seconds, leaving us all speechless.

Jiya has come across as a champion and a force to reckon with, considering there is literally no stopping her. The young prodigy was awarded a trophy and certificate for her breakthrough by Abhay Dadhe, Associate Vice President of Swimming Federation of India for setting this impressive world record. More so, having done it while also suffering through a disorder like Autism that is known to impair the ability to communicate and interact.

Jiya Rai, 11 yrs old student of Navy Children School #Mumbai created a world record as the fastest 'special' girl to swim 14 km in open water from Elephanta Island to #GatewayofIndia. She took to swimming as therapy to #Autism spectrum disorder & made it her passion@indiannavy pic.twitter.com/j28RnHk3a5

Also Read : This NGO Smashed The Stigma Around Periods By Organising A Feast Cooked By Women Who Were Menstruating. We Love This So Much

Her achievement has, therefore, not only marked a win for the girls who are otherwise only pushed down. They are asked to not compete with guys in the fear of losing or to stick to stereotyped hobbies. but this proves that talent doesn’t discriminate.

Jiya’s father, basking in the fatherly pride and honor of his daughter setting a world record also commented on the news and said, “She easily cleared the first one-hour at 5.40 am when it was dark. For the first hour, she did her best to move ahead. Beyond that, it was a cakewalk.” And here we are, panting and gasping for breath after just swimming for two laps.

He further shared how her daughter Jiya started training only a year ago when she was 10 years old. He said, “In 2010, doctors advised me to get my daughter into swimming. In 2013, Commandant Ashok Yadav at INHS Ashwini Hospital advised me to get my daughter trained in swimming. She took up the therapy in the right spirit and today she can communicate with us and fulfill her needs better.”

In one fell swoop, entering the India Book of Records, Asia Book, and Limca Book of Record all at once, Jiya will next be seen participating in the paralympic games that are to be held in Bengaluru next month. After that, she will be aiming at the 2020 Summer Olympics in Tokyo which will be held in July. Safe to say, we can expect the swimming prodigy to create ripples even there and make us proud!

Also Read : Women In Kullu Carried A Woman In Labour On A Palanquin For 18 Kms To Get Basic Healthcare. And We Spend Our Money On Making Walls For Trump’s Visit