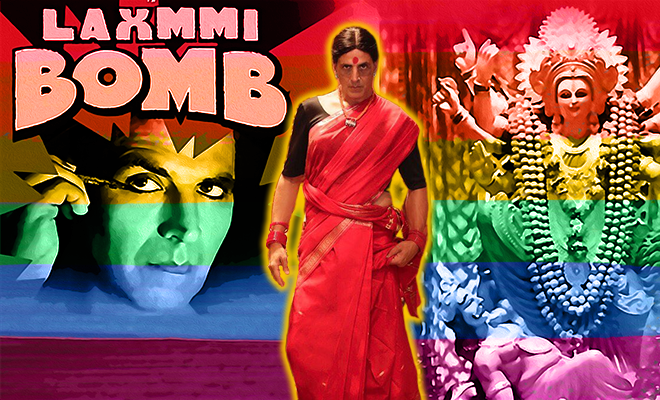 When it comes to the representation of LGBTQ members of our society, Bollywood is just starting out. And at this point, I can’t say that we’re getting it right. Sure, the effort is there, but when we’re handling a topic this sensitive, some films end up doing the exact opposite of what was intended. Like say Dream Girl – the movie received a lot of backlash for ridiculing the portrayal of homosexuality and cross-dressers. No, you don’t become a lesbian after losing faith in men. It’s not like yellow doesn’t suit you, so you swear off it and fill your wardrobe with blues. Sexuality doesn’t work that way. So now when Akshay Kumar has started working on Laxmmi Bomb, a remake of Tamil horror-comedy Kanchana, I have my reservations about it. Akshay essays the role of a guy who gets possessed by a spirit of a transgender person. He recently shared a picture of him in a saree, from the movie.

He shared a picture of him, in a saree (clearly in a possessed state) standing next to a Durga idol and wrote: “Navratri is about bowing to the inner goddess and celebrating your limitless strength. On this auspicious occasion, I am sharing with you my look as Laxmmi. A character I am both excited and nervous about… but then life begins at the end of our comfort zone… isn’t it? #LaxmmiBomb (sic).” I understand the attempt is there, but will it turn out to be a ridiculing the LGBTQ community? We are fervently hoping not. Considering the fact that it is a horror comedy, there’s a chance things could go horribly wrong. However, with Akshay Kumar’s history with socially-relevant movies that have been handled decently, I have some hope.

In India, there’s a lot of stigma attached with transgender individuals. A lot of people are superstitious about them and are afraid of the community. In fact, since decades they have been at the bottom of our social structure, with the society taking away their right to lead a normal life – like being educated and having a career. I really hope this movie doesn’t further re-emphasise the superstitious notions around this community.

Earlier this year, Akshay Kumar had shared the first poster of the film, showing him applying kajal. Sharing the poster, he wrote: “Bringing you one bomb of a story, Laxmmi Bomb starring @kiaraaliaadvani & yours truly! Bursting in cinemas on 5th June,2020 (sic).”

ALSO READ: I Watched Ayushmann Khurrana’s Dream Girl And The Only Good Thing About It Is The Trailer.

The movie also stars Kiara Advani as his girlfriend. Hopefully this time around, she won’t be a prop in the movie, like she was in Kabir Singh. Come on, we need to see more of her personality!

Twinkle Khanna Shared A Picture From Her School Days To Promote A Cause. She Was As Awkward As The Rest Of Us!(Opens in a new browser tab)

Akshay Kumar Is Playing Pullela Gopichand But We’ve No Idea Who Is Playing PV Sindhu. In Her Own Biopic!(Opens in a new browser tab)