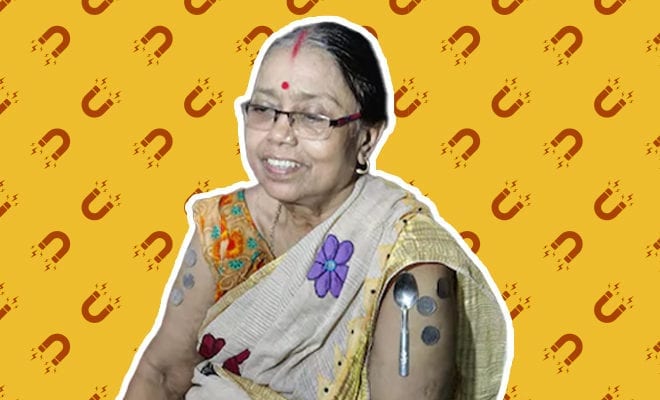 After Taking Both The Doses Of The COVID Vaccine, This Woman From West Bengal Has Developed Human Magnetism

I received the first dose of the coronavirus vaccine a few weeks ago. Before getting jabbed though, I had done my research and prepared myself for the adverse side effects. Fever, nausea and extreme weakness. These are extremely common and hence did not worry me. However, because I spend a massive chunk of my time mindlessly scrolling through news portals I know that there are more than a few people who’ve experienced some not-so-common side effects after taking the COVID vaccine. Like this woman, for instance, who became a human magnet. I am not making this up.

Apparently, numerous cases of human magnetism have been reported in our country. Folks are claiming that they are developing this condition after taking both doses of the COVID vaccine. The latest person making this claim is 66-year-old Anima Naskar from Barsat, West Bengal. Although she doesn’t believe that the vaccines have caused her to become a human magnet. I didn’t even know human magnetism was possible. It’s kind of unbelievable.

Anima realised that metallic objects were getting stuck to her body when her son tried to stick some coins on her and it worked. She told India Today TV, “I saw on TV that someone in North Bengal has faced similar problems. The man claimed that he has developed this issue post completion of two doses of vaccine. Since I was also done with both the jabs, my son tried sticking coins on my hand and it worked.”

Multiple cases of human magnetism have been reported from across the country with the latest being a 66-year-old woman from Barasat, #WestBengal | @Suryavachan https://t.co/c7b2XRtXb0

Her son, Sandeep will be going to the local government’s health department to report his mother’s condition and find out more about it. Along with them, we are also extremely curious to know more about what could cause someone to develop human magnetism. Sandeep told reporters that he doesn’t believe the vaccines caused it but he has his doubts. He also said that applying talcum powder is causing all the metallic objects stuck on Anima’s body to drop. Anima told India Today TV that she isn’t afraid of her condition, just curious.

I have so many questions. How long does it take for the magnet properties to wear off? What happens if Anima gets too close to a large chunk of metal, like an almirah? Will she ever be able to get through a metal detector? And lastly, is there even the slightest possibility that her genes mutilated and now she has turned into a real-life Magneto, like from X-Men? Okay, maybe that’s a bit of a stretch.

This is hands down the most bizarre vaccine side effect we’ve heard of.