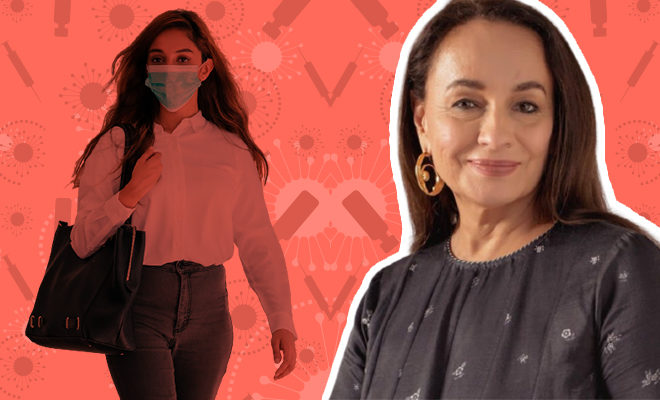 Actor Soni Razdan Says People Between The Ages Of 16-40 Should Be Vaccinated First. “They’re Going Out”

Ever since the coronavirus first made an appearance in our lives, all anyone could talk about was the vaccine. People whipped up conspiracy theories and tried to guess its potency but no one would’ve guessed the essential role India played in the manufacturing of the vaccines. Anyway, now that the vaccines are finally here there is undeniable apprehension amongst people. To take it or to not take it, that is the question. The vaccination drive started earlier this year just for health care professionals. It moved on to people with pre-existing conditions and senior citizens. And now, from 1st April, anyone above the age of 45 will be eligible for the vaccine. And it’s not an April fools joke, that would be cruel. Although, a few people are questioning why the government isn’t just opening it up to the public. Actress Soni Razdan, for instance, tweeted asking why people between the ages of 16-40 aren’t being vaccinated first.

Alia Bhatt’s mother, Soni Razdan has been extremely vocal about the ongoing coronavirus vaccination drive. She took to Twitter to express her concerns about the order in which the vaccines are being doled out. Soni seems to think that people between the ages of 16-40 should be vaccinated first because they are the ones who are travelling, going to work and socializing in bars and restaurants without masks.

Soni Razdan tweeted, “When it’s really the 16 to 40 age group that’s ‘socialising’ going out to work, bars, nightclubs etc (the last 2 without masks mostly) just can’t understand why they aren’t getting the vaccine first. @uddhavthackeray @AUThackeray.”

When it’s really the 16 to 40 age group that’s ‘socialising’ going out to work, bars, nightclubs etc (the last 2 without masks mostly) just can’t understand why they aren’t getting the vaccine first 🙈 @uddhavthackeray @AUThackeray

Also Read: Soni Razdan Says Marriages Are Failing Because Women Are Independent. She Can’t Be Serious!

On one hand, we have to agree that she has quite a point. But on the other hand, senior citizens have lower immunity. I think it’s safe to say that we’re on the fence about this. The one thing I know for sure is that this pandemic needs to be a thing of the past now. Am I the only one sick of wearing a mask and not being able to hug people?

This isn’t the first time Soni Razdan has raised questions about the vaccination drive. Earlier, she took to Twitter to ask why actors weren’t being vaccinated first considering they can’t take precautions while they’re in front of the camera and are exposed to the virus on set. She raised these questions after her daughter’s boyfriend, Ranbir Kapoor tested positive for the virus and Alia had to quarantine herself.

Soni Razdan wrote, “So many actors get COVID and are at huge risk when working. I mean we actually can’t wear masks. But no one seems to think they need to be able to take the vaccine yet.” In another tweet, she wrote, “It’s a profession none the less. People need to work right. Others can do so wearing protection but actors are the only people who cannot ! And so ..,” adding, “Oh and every actor isn’t a huge superstar .. so those who are whining on about that can keep shut. Stop watching content na then. It is made with great risk to the concerned actors’ lives. Being at the top of one’s profession can’t be a disqualification for a vaccine. Jeez.”

Here’s hoping sooner rather than later everyone can get vaccinated and that puts an end to this horrible pandemic.