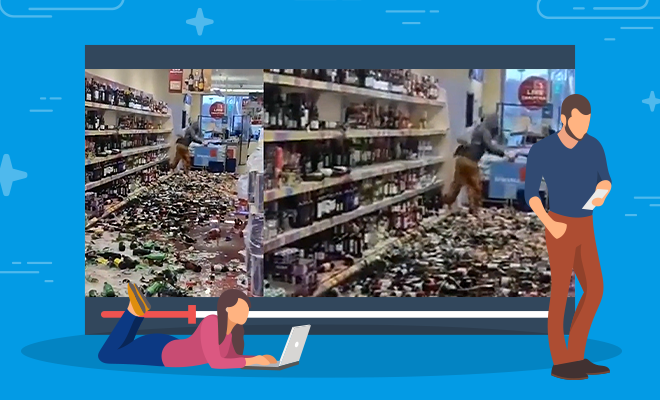 A Woman In The UK Smashed Over 500 Alcohol Bottles In A Supermarket. We Don’t Know What She’s Going Through, But We Relate

Aren’t you’ll glad this year is finally ending? I would say that 2020 couldn’t have been worse, but I don’t want to challenge the universe. From the pandemic to scandals to natural disasters, it was enough to teach us all to sleep with one eye open. If there was a theme for 2020 it would’ve been frustration, alcohol and old comfy clothes. Which is why when I came across this video of a woman smashing hundreds of liquor bottles in the UK, more than being shocked at her actions, I could relate to the feeling behind them. It’s like us Indians like to say, “bhavna ko samjho!”

In a shocking case of vandalism, a distraught woman was caught on camera smashing over 500 alcohol bottles in an Aldi branch in Hertfordshire, UK. The video of the incident which has gone viral like wildfire shows this woman casually walking through the aisle of alcohol in the supermarket and throwing the bottles on the ground. She broke nearly 500 bottles of booze.

You know, we don’t even let our friends waste half a peg. In that sense, this video really pinched. Otherwise, for some reason, I really relate to her. All year, the one thing that that I have over and over again in my head is smashed things. I am sure you’ll agree as well.

Also Read: The Latest Tik Tok Trend Has People From Around The World Adding Contraceptive Pills To Their Shampoo’s To Make Their Hair Grow. What Even?

British supermarket. Woman breaks $130k USD worth of liquor bottles individually. Must have taken at least half an hour. Where are the police? Response time? Why isn’t manager dragging her out by her hair? pic.twitter.com/1LghsCCyZJ

According to various reports, this madness went on and on. The woman, for no apparent reason, broke alcohol bottles worth a staggering $130,000 (Rs 96 lakh) approximately. BRB, picking up my jaw from the floor.

In various videos that have been uploaded by bystanders and even the authorities, the woman is seen wearing a grey hoodie and yellow pants. In one of those video’s, you can see her reaching on the top shelf to smash all those bottles and when a bystander tries to intervene, she even throws a gin bottle at him. In another video, you can see the woman slip and fall due to the mess. I have to admit I laugh a little bit. However, what pulls attention in all the video’s I have seen is the sea of broken alcohol bottles in the foreground. Can you imagine how that aisle must smell? *gags*.

Eventually, the security guard came and escorted her outside and then the woman was arrested. I think it’s safe to say, she is never allowed back in the supermarket ever again. The police took her to the hospital because she cut her hand while breaking all those bottles. In extremely bizarre incident was witnessed by at least 50 people who were in the store at the time. What I wouldn’t give to be a fly on that wall.

I don’t know what that woman was going through but as I said earlier, weirdly, it’s very relatable. If I was present, I would probably join her on this bizarre rampage. Her breakdown was the perfect depiction of how we’ve all felt throughout this horrid year. However, we don’t know why she did what she did only that she just made it to the top of our bizarre things to have happened in 2020 list.