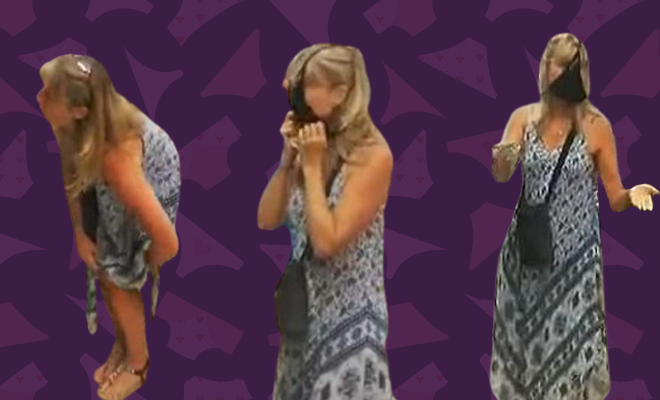 One of the latest fashion trends going around, one that many are trying to pick on consciously is that of catfishing your clothes for something else. A skirt? Wear it as a top. A dress? Pull it like a skirt. A shirt? Turn it into a dress. While options are unlimited, one that went beyond imagination was that of sporting an underwear like a mask. An effort made during desperate times, when a woman walking the aisle of a supermarket, used her underwear as a mask upon not having one.

A video that has now gone viral, and is cracking us up all the same shows a woman with the quickest thinking on her feet, as she catfishes her thong into a rather doable mask when she was caught off guard without one. Now, isn’t that creative?

The incident took place in South Africa in a supermarket, where the woman in question was seen standing in the queue to get her items checked out. When she was asked to put on a mask before she proceeded with her cart, or she would not be allowed inside the store, she did what any of us might not have. Taking advantage of wearing a long dress, she instantly pulled down her underwear and made a make-shift mask.

We as South Africans are truly one of a kind 🤣🤡 pic.twitter.com/hhDdkmapQk

The people in the background who were also shopping in the store can be seen asking what was going on and murmuring words like, “Good lord” when they finally found out. A woman standing behind her also went on to say, “Well, personally, I find it acceptable: It is a mask. And quite frankly, I think the bacteria on your knickers is less than on the mask. Well done to you.”

With almost 5K likes on the video, people have all sorts of reaction to the video. Some are wondering how was she allowed into the store in the first place without the mask, whereas others are calling the move rather “brilliant”.

While it is still not the best alternative, we have to admit the woman knew how to turn the situation around, and how! Although, it wouldn’t be a bad idea to carry a real mask the next time around!

Also Read : In A Viral Video, Man Seen Spitting On Dough To Make Rotis At Meerut Wedding. This Is Extremely Disgusting!