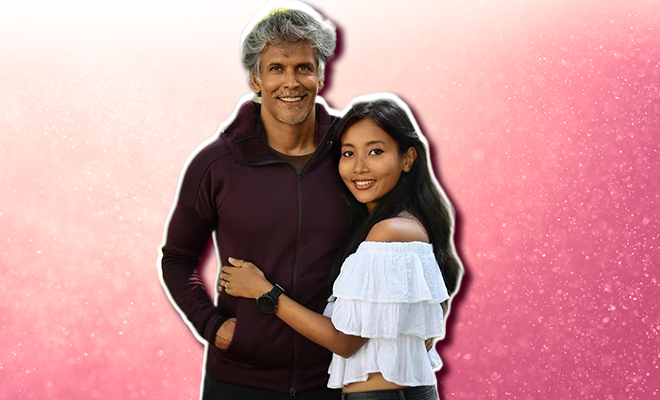 Let’s admit, no matter how many times we say that we are very open-minded and accepting, at some point, all of us judge. Fishes swim, birds fly and humans judge. Unless you reach a higher level of consciousness and follow the path of Buddha, I feel all of us have indulged…at least harmlessly. We say or think things like ‘she is in it just for the money’, ‘he looks like a fuckboi’, ‘she could’ve done better’. Everyone is entitled to have opinions, but I feel we should voluntarily ensure that it’s not coming a place from a personal bias. But most importantly, we shouldn’t ruin someone else’s day with our opinions. Who are we kidding? That would be possible in an ideal world. In the real world, the population of trolls is incredibly high and they get through life by pulling celebrities down. So when Milind Soman and Ankita Konwar got married, these lowly creatures got troll-fodder for life.

All of a sudden, the love between two consenting adults begins to get defined by their age difference. He is 26 years older than her and this fact overshadowed everything else – their promises, love and emotions. If the couple weren’t as intensely private as they are, there would have been a panchayat session to take the couple down. But fortunately they don’t belong to the masses and chose to not give a fuck – a skill we should all acquire, btw. In an ad, the couple got together to address the stereotypes and taboos that have plagued Indian society when it comes to marriages and it is as raw as it can get!

The much-in-love couple went through the comments that were thrown at them, and they were quite typical. People called him an ‘old man marrying a young lady’ and Ankita a ‘gold digger’. Firstly, if you take trolling so seriously, then at least come up with something innovative. Secondly, cut it out, will you?

In the video, Ankita asked a question that makes so much sense. She asked, “If you are with somebody that probably the whole society is really really happy with but you are not happy, then what is the point?” So, if you worry about log kya kahenge, and have at some point given up on the one you love for that, I say next time don’t. The trolls won’t come and solve your relationship problems later, when you’re having a tough time living with someone who is society-approved but not heart-approved.

The couple is not bothered by what these people say and have learnt to take things with a pinch of salt. So when they read out a comment that said, “Ankita should call him Papaji,” Milind winked and said, “She does, sometimes.” Ooh, naughty, Milind.

ALSO READ: Ankita Konwar Revealed How She And Milind Soman Made A 26-Year Age Gap Work, And It Turned Us Into Mush Balls!

Milind opened up, “There is a big age difference…So it is the difference between my age and my mother’s age.” He further explained, “Conventionally, society has created these barriers for people when they fall in love. These are the people who should be together, these are the people who should get together. Those are based on many things – race, religion, country, gender…I think there should not be any barriers. I think everybody should be free to choose who they love and who they like and that should be based just on feelings that they have in the heart, it should have nothing to do with the society.” Suck it, trolls!