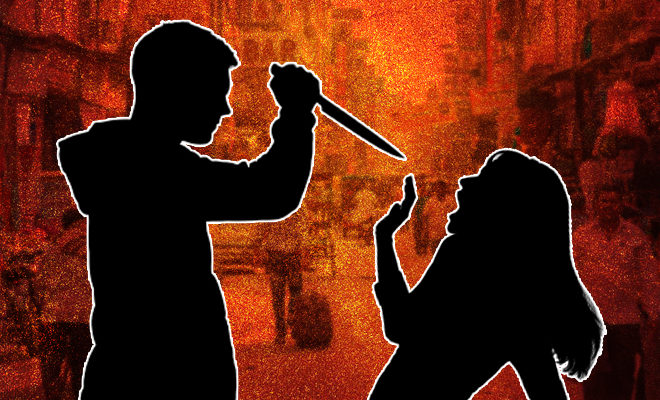 Let’s talk about women’s safety for a minute, shall we? We live in a country where there is none. It’s that simple. Here, women getting butchered and hunted is just everyday news you read in the newspaper. Yes, it’s momentarily upsetting but most people don’t even give it a second thought. This nonchalant behaviour coupled with patriarchal beliefs enables men to continue abusing, raping, and even murdering women. And this recent bone-chilling incident from Delhi is proof of that. A man was caught on video stabbing his wife to death, on the street, in broad daylight. Bystanders watched, filmed the incident and some just drove past like nothing out of the ordinary was happening. Not one person came forward to help the woman. Exactly how are women to feel safe in an environment like this?

On Saturday, in the Budh Vihar area of northwest Delhi, a 40-year-old man identified as Harish Mehta stabbing his wife, Neelu, approximately 25 times in broad daylight. This gruesome incident was caught on video. It shows the man towering over the woman stabbing her multiple times as she lay in a pool of blood. According to various reports, passersby casually watched this happening. Some just drove past the entire incident. No one attempted to stop the man from murdering his wife because he threatened a few locals by saying that it’s an “internal matter” between him and his wife. It’s shameful and horrifying.

Finally, the police reached the spot. By then the locals had also gathered around. The accused tried to flee but was apprehended by the police. His wife, Neelu, was rushed to Sanjay Gandhi Hospital where she was declared dead on arrival.

Wife repeatedly stabbed by her husband on a crowded street in #Delhi's Rohini.
(@TanseemHaider )#Crime https://t.co/jVHLtMkhDF

According to various reports, the reason Harish committed this monstrous crime was that he suspected Neelu to be having an extra-marital affair. But that’s not all. You see, Neelu worked at the Safdarjung hospital in Delhi. Harish did not want her to work and told her to become a housewife. There was a disagreement after Neelu refused to give up her work. Tired of the daily arguments, she went to live with her parents. The police said that when Harish decided to kill his wife “to end his pain”. Convenient, isn’t it? Around 2 pm when Neelu was coming home from work, Harish came and started stabbing her multiple times in a fit of fury.

The next time you wonder why India isn’t progressing, think of this woman who was murdered, on the street, all because she wanted to work against her husband’s wishes. The fact even today, women are not allowed to make their own decisions is shameful and disgusting but not shocking. We have no autonomy over our careers, marriage, not even our own bodies. Also, the fact that people gathered around to watch and film the incident but no one tried to help the woman is absolutely appalling. The mob just let the man murder his wife in broad daylight like it was nothing. No one lifted a finger but they all recorded videos and took photos of the victim’s dead body which are now floating around on social media. In what world is this acceptable?

Hence, I ask again. How are women to feel safe when men can murder their wives on the street with no objection?

In Gujarat, A Man Murdered His Sister Because He Was Upset About People Passing Comments About Her Character