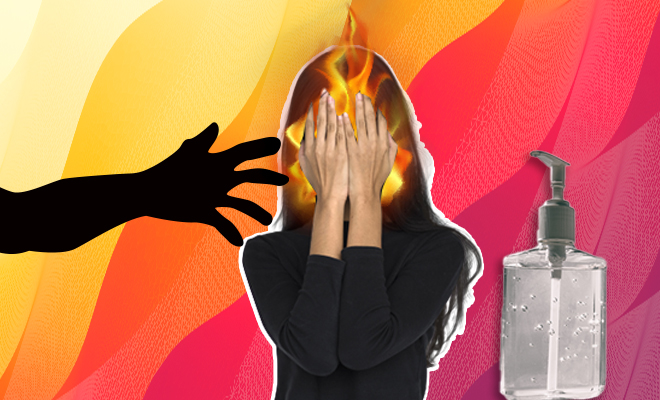 A Depraved Man Burnt His Girlfriend’s Face Using A Sanitiser Because His Ego Was Hurt. Is There No End To Toxic Masculinity?

Right when all of this started (the lockdown, not life), I was talking to my bestie on call and as usual, she was acting like a protective mother hen. This time around though it wasn’t about my bad decisions when it comes to boys. Even though we know sanitisers contain alcohol and that makes it pretty inflammatory, our minds were preoccupied with the ubiquitous fear of the pandemic we are in. So she warned me to stay away from a flame when I have used a sanitizer – just to be safe. We made sure we remind each other about these little things, so it doesn’t get worse for anyone. This is love but mainly, this is humanity. We are supposed to be a species empathetic to each other’s pain and yet we are the only ones who hurt each other for fun or to fan our egos. Is this what humanity is? If yes, then really, let’s just all be animals.

Of course, it’s largely men that have degraded humanity by going around wrecking women because they feel entitlement and superiority. They want women to serve them and obey them and when that doesn’t happen, they use weapons of brutality to break her pride – acid attacks, rapes, mutilation, etc.

Man throws Sanitizer on Girlfriend's face, burns her using lighter after she refuses to give him Rs.2,000. pic.twitter.com/kPYM9ArHUg

Yet another nefarious incident has come to light in which a man burnt his live-in girlfriend’s face by pouring sanitiser on her and setting it on fire. This happened in Chandigarh and reportedly because she refused to lend him Rs. 2000. She was rescued and admitted to the hospital by her neighbours. The woman suffered 20 per cent burns and after getting discharged filed an FIR against the man, identified as Naresh.

The assault survivor had moved to Chandigarh from Shillong in December 2019 and after falling for Naresh, started living with him. However, he has been aggressive and often assaulted her for money. The police have booked Naresh under IPC sections 342 (wrongful confinement), 324 (Voluntarily causing hurt by dangerous weapons or means), and 506 (punishment for criminal intimidation), as reported by Times Now.

ALSO READ: Rangoli Chandel Revealed The Horrifying Details Of Her Acid Attack And It Will Enrage You. We’ve So Much Respect For Her

"Women’s lives can’t be put on hold till we emerge out of the pandemic." – Ashwini Deshpande (Professor of Economics, Ashoka University)#lockdown #lockdownextension #DomesticViolence #domesticviolenceindia #ncw #unwomen

He had been assaulting her for a while now but our culture has taught its women to ignore it all to maintain the relationship. Like in the movie Thappad, everyone kept telling Taapsee’s character that it was just a slap. So maybe Naresh started with a slap and today went on to burn her face down. It is never really “just a slap”. Any assault is not okay and one shouldn’t wait to see to what extent they can go. Domestic violence has increased during this period as men have become increasingly frustrated and women, even more trapped due to the lockdown. It is sickening that men think they can shit all over equality and humanity with no consequences whatsoever. This needs to stop.

ALSO READ: This Man From Gujarat Brutally Thrashed His Wife After She Beat Him At Online Ludo. So Much Violence For A Game?