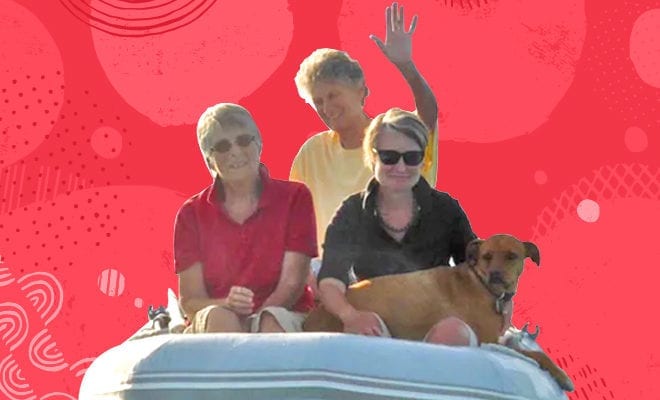 A Couple From Canada Decided To Adopt An Elderly Woman. This Is So Cute!

What is the first thing that comes to your mind when you hear the word ‘adoption’? If I were to answer that, I’d say puppies. My beau on the other hand might say cats, and my mother would simply assume a child. However, that’s not what came to the minds of a Canadian couple when we say the word ‘adoption’. Let’s say that all of us were pleasantly surprised when we read this story of  a couple who ended up adopting not a dog or a cat or even a child, but an elderly woman! Wait, we didn’t even know we could adopt elderly people.

That’s right, breaking all sorts of stereotypes and endorsing this unique concept of adopting elderly people were Marike Finlay and her partner Karin Cope from Canada who decided that they needed the influence of an elderly woman in their lives, one whom they could shower with lots of love and care.

This decision to adopt was taken by the couple after the two retired from their jobs and decided to Nova Scotia coast to enjoy their retirement life, along with their elderly friend Elizabeth Bigras who is almost 20 years older to the couple.  Usually people around the world have been sending their old and ailing parents off to old-age centers to be able to live their own lives to the fullest and without any responsibility looming over their heads, there are also people  like Marike and Karin who choose to be in the company of the elderly.

Also Read : This Is The Cute Story Of An Elderly Couple That Reunited After Spending 8 Months Apart Due To Corona

Elizabeth, who is 86 years old, met the couple (who work as professors at the McGill University) through her late husband. After her husband passed away, she grew closer to the couple, and would often accompany them to sailing trips. The bond only strengthened with time and the decision for Marike and Karin to take care of her came naturally to them. And so they decided to adopt her.

Finlay shared while speaking to CBC Radio that, “We knew that if we were inviting Elisabeth to come and retire here with us, that meant that we were committing to be with her throughout her old age.” And knowing well enough it would be a big responsibility, the couple went ahead and setting an inspiration for everyone around.

The three women have been living together for years now, and like a happy family no less. Elizabeth who was a psychiatrist has n children of her own and shares that if the couple hadn’t adopted her, she would be looking at spending the rest of her life in an  assisted-living facility. The couple shares that while their own family has its inhibitions in understanding their decision, the locals have come to an “understanding very quickly that we are a family.”

Also Read : This Nepali Woman Turned Her Grandmother’s Craft Of Knitting Socks Into A Brand That Supports And Empowers Elderly Artisans