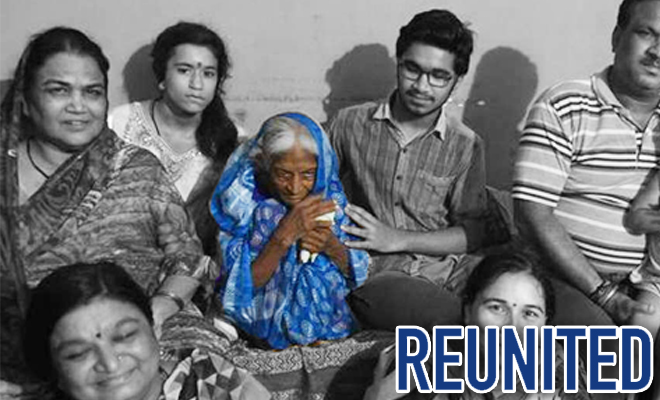 A 94-Year-Old Woman Reunited With Her Family Thanks To Google And WhatsApp, Forty Years After She Disappeared. This Is Heart-Warming

The internet is a different world in itself, and our generation wouldn’t survive without it. We depend on it for the most basic things, and more often than we would like to admit. Clothes? Get them online. Groceries? There’s an app for that. Unwanted opinions? Free and made to order. And now, in the internet’s Pandemic edition, you can even graduate online. Caps and gowns available for one day delivery, no refund if you regret your degree. So yes, the internet is a weird place. But for all our dependency issues, we’ve also seen a lot of good news come out of it.

A 94-year-old woman from Maharashtra returned home 40 years after her disappearance, and has been reunited with her family. Panchubai went missing in around 1979-80, and a truck driver found her walking along a road in Damoh district, Madhya Pradesh. She seemed confused and helpless.

Thanks to the Internet, a 94- year-old woman from Maharashtra who had gone missing four decades ago has been reunited with her family.https://t.co/A7C36cak5g

“She had been stung by honeybees and could not speak coherently,” the truck driver’s son, Israr Khan, told PTI. His father took her home and she has lived with his family ever since. “We called her Achchhan Mausi. She was mentally unstable and used to mutter in Marathi which we could not understand.”

“She used to talk about a place called ‘Khanjma Nagar’. Google search of the name yielded no result. Then on May 4 this year, as we were at home amid lockdown, I again asked her about her hometown. This time she spoke about a place called Paraspur. We googled it and found that there is one Paraspur in Maharashtra.”

On May 7th, Khan contacted Abhishek, who runs a shop in Paraspur, and found out that there was indeed a village called Khanjma Nagar near the town. He then sent Abhishek a video of Mausi, which she shared on a WhatsApp group of the Kirar community he belonged to. The woman’s relatives were traced in no time.

The video was sent to Panchubai’s grandson, Prithvi Bhaiyalal Shingane, who lives in Nagpur. The family was shocked and eager to bring her back home. Due to the lockdown, this only became possible for them on June 17th. The family shifted from Khanjma Nagar to Nagpur about five decades ago.

“In 1979, my father brought my grandmother to Nagpur for treatment of her mental ailment from Khanjma Nagar. The doctors were optimistic about curing her. But one day she left home in the evening, telling neighbours she was going to her father’s place, and disappeared for ever.” Shingane told PTI.

He looked for her for years, but couldn’t find her, and unfortunately died in 2017. Her grandson also said that Panchubai is in such good health at 94 thanks to the Khan family who took care of her.

Panchubai’s story is a true example of how far human beings can go to help a stranger, purely from the goodness of their hearts. The truck driver had no reason to look after a woman he had nothing to do with. Not only did his family take her in, but they also reunited her with her grandson. People like the Khans prove that humanity still exists within people.

94-year-old woman reunites with her family after 40 years with help of #Google, #WhatsApphttps://t.co/Tss0ka1m40

ALSO READ: This Woman Walked For Days In The Forests Of Chattisgarh To Rescue Her Husband From Naxals. She Is So Brave.