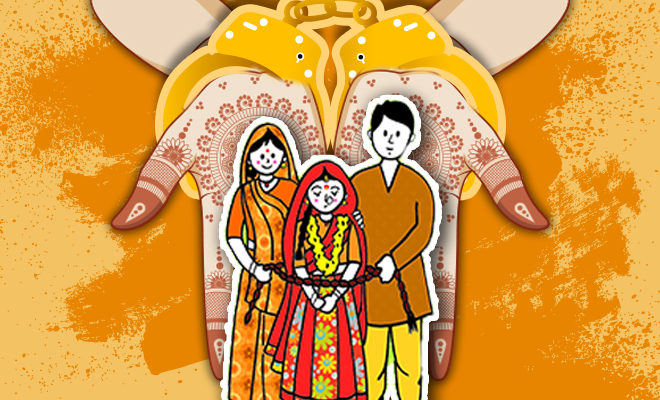 A 13-Year-Old Girl Was Rescued After Her Family Made A Second Attempt To Marry Her Off. Economics, Society And Patriarchy Are To Blame

Until recently, I looked at parents who got their daughters married off before she could even become legally eligible as evil. I know gender inequalities are a result of years of social conditioning but the feminist in me made my blood boil when I thought of these young brides of India. And even now, it’s not like it doesn’t make me rage but I have opened my mind to understand that the issue of child marriage is a complex one. And often, parents who turn their daughters into child brides are not evil but rather desperate. Adverse economic conditions, lack of safety, and several other reasons make these parents marry their child off, assuming it’s good for her. They just don’t know any better.

This is why, even though it’s illegal, child marriages are still prevalent in India. And these parents, through years of conditioning, have come to believe that this is how it is supposed to be. Thus, they try to find sneaky ways to get on with the illegal marriages and officials have to intervene!

After officials stopped the marriage of a 13-year-old girl hailing from Bengaluru, the family made a second attempt at completing what they started. The wedding was supposed to take place at Sathuvachari in Vellore but was stopped by the officials of the District Social Welfare Office (DSWO).

The young girl is a class 8 student in Bengaluru and was brought to Vellore in a two wheeler by her family for the wedding. The wedding was scheduled for 24th June at Chelliamman Kovil in Vellore New Bus Stand, as reported by New Indian Express.

Apparently, as several Indian parents do, her mother used emotional blackmail to convince her to get married. She told the girl that if she didn’t agree, her mom would kill herself. The girl’s father passed away and she was being raised by her mother and uncle. It’s common for girls who lost their father to be married off because their mothers fear their safety. They fear if they will become victims of sexual assault or are abducted without a male in the family to protect her. The minor girl  was to marry her 24-year-old relative from Polur, Tiruvannamalai.

The girl has been rescued and after the results of her COVID-19 test, she will be taken to a children’s home in Walajah. It was the minor’s aunt who had alerted the officials and I am glad at least someone had the courage to take a stand for the young girl. If she hadn’t been rescued, there would be the third attempt and who knows that might have been a successful one.

ALSO READ: A 16-Year-Old Girl Was Forced Into Child Marriage In Telangana During The Lockdown. When Will This End?

Making education and vocational courses available in the lower-income section of our society would be the first step. Psychological counselling for parents, educating adults, and safeguarding women against sexual crimes would help reduce child marriage. Because let’s face it, the law is just a suggestion in many parts of India and with years of suppression of women, this is where often nobody reports such crimes. Patriarchy and poverty are deadly diseases that are inherited by those who are suffering from it. And the least we can do is stop them from spilling onto the next generation.

ALSO READ: A Minor Girl Was Secretly Forced Into Child Marriage In Haryana During The Lockdown. She Got Rescued But So Many Crimes Against Women Go Unreported.