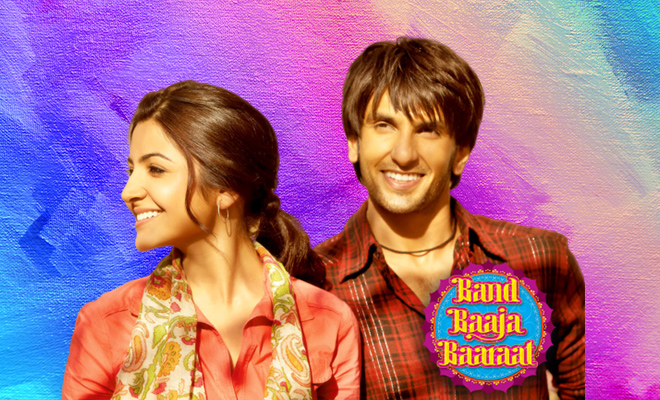 9 Years Of Band Baaja Baraat: 5 Ways The Movie Is Relatable Even Today

Sometimes, we like someone or something immediately and sometimes, it takes time. It’s only after you’ve invested enough time and energy on them that you realise that you like them after all! Like a glass of red wine, I had to acquire a taste for Ranveer Singh and his shenanigans. Nine years ago exactly on this date, he made a grand entry in Bollywood with his Band Baaja Baraat alongside Anushka Sharma.

If you ask me, no other actor has growth as exponential as his, in these nine years. One of the reasons the movie is so special is that just like their characters in the film, Anushka and Ranveer too, were young and trying to make it big in the industry. While it was Ranveer’s debut, Anushka had only done two films before this, Rab Ne Bana Di Jodi and Badmaash Company. It’s beautiful how both the actors seemed to have come a long way since then and realised their dream, just like they did in the film. Ranveer Singh even shared a post on Instagram, celebrating the film and his journey in the industry.

The movie itself was one of the best movies of the year in sense that it was so full of life and wasn’t a fairytale version of romance. It was the kind of relationship I have seen one too many times, except not all of them have a happy ending. Here are 5 reasons we connect with Band Baaja Baraat even today!

Bittoo (Ranveer Singh), an ingenious enthu-cutlet gate crashes a wedding (God, I want to do that!) and Shruti (Anushka Sharma) who was assisting the co-ordinator confronts him. He pretends to be with the videography team and shoots her performance. When he sees her later, he begins to flirt with her and she tells him to keep it calm ‘cause she is focussed on her dream! But there he is, almost smitten by the allure of her smile and yet, it’s not like he is head over heels for her because love doesn’t happen like that in real life.

Both Bittoo and Shruti were pressed by their parents to do different things. Both belonged to typical Indian families with their typical mindsets. So Shruti’s parents wanted her to get married ASAP while Bittoo’s father wanted him to join him in his family occupation (sugarcane harvesting). I mean, it’s been nine years but not a lot has changed. Most Indian parents still continue to push their kids for these things, doused in gender-bias.

Their ambitions and life goals

They were young, enterprising and filled to brim with ambition, at least Shruti was, to begin with. Her dream was to start her own wedding planning company, and she was working hard to move closer to her goal. Bittoo, on the other hand, was street-wise and wanted to somehow start a business that would take him away from his otherwise doomed fate, where he’d be working on a sugarcane field. While global economy may be suffering and in India it’s a little slow right now too – but there’s still growth. People are still starting up new ventures and startups and this just highlights the spirit of today’s youth! Even if you’re not starting something of your own, you’re hustling nonetheless!

The fatal attraction and the awkwardness after

Even though they had started their business partnership on the promise that they will never get romance get in the middle of their equation, they break that rule and end up having sex. That leaves Bittoo worried because Shruti had warned him. Later, they are both awkward and the tension between them escalates, leading them to fall apart as professional partners. Even today, so many friendships have gone sour because sex got in the way.

While after that night of passion, Shruti realises she has fallen for him, Bittoo feels guilty for mixing business with pleasure. Bittoo misunderstands that the night meant nothing for Shruti, while she assumes that he wants nothing more and pretends to be okay with that. Both are in love, and want much more, except that one of them doesn’t realise it and the other doesn’t express it. Honestly, a lot of potential relationships don’t bloom because we don’t say what we really feel. We don’t want to show our vulnerable side or face rejection, so we act like we don’t care when we really do! And while in the movie they end up clearing the air, it doesn’t happen often in real life and a lot of feelings just remain unsaid!