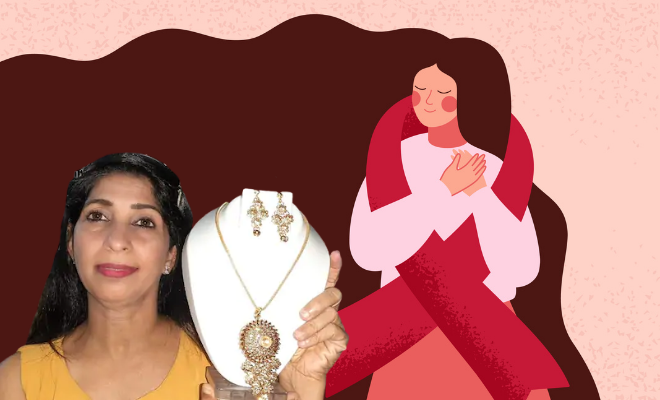 Woman Designs Jewellery That Doubles Up As A Safety Gadget. This ‘Shining Armour’ Will Help Women Protect Themselves

The rate of crimes against women…no, let me rephrase that. The rate of men committing crime against women is skyrocketing and worrying. Women aren’t safe anywhere and it is evident from the hundreds of cases of rapes, molestation, abuse and harassment on street we come across every day. Not just the sexual offences but petty crimes like chain snatching, jewellery theft and street violence is also very prominent in India which makes our women feel unsafe even in broad daylight.

Imagine this. You, a woman, are walking on a dark and dingy street wearing a nice piece of jewellery and you hear something or see a lurking shadow behind you. No, it’s not a ghost; but worse, a man (TBH, we are actually safer with a ghost in this country). Now he might be after your jewellery or worse, you. In either case you are in serious danger ‘cause let’s face it he’s not going to think twice before hurting you. Now, how would you like your glistening jewellery to double up as a safety weapon and stave off these perverts and chain-snatchers? Sounds cool, right? A woman from Delhi designed a jewellery cum armour that could really come in handy when you find yourself in a dicey situation.

Rachna Rajendran created ‘shining armour’, an ornament embedded with a special alarming device for women’s safety. She collaborated with the young scientist from Varanasi, Shyam Chaurasia who has previously developed a lipstick and a compact hand grenade for the same purpose and the two wielded out the safety jewellery that sends your location to your preselected contacts. This jewellery looks like your normal ornament but can call for help with one press of a button. Plus, if someone snatches and flees with it, the location of the snatcher can be traced through the device too. Clearly, all that glitters is not gold. It could be a gadget to feel and be safe.

Ornaments to be the ‘shining armour’ for women’s safetyhttps://t.co/EdpNfEPDsv

Also Read: Government Launches An SOS Safety App For Women. But Where Does That Leave Women Who Don’t Own Smartphones?

Talking about the device, Rajendran told IANS, “This safety device has been specially designed to prevent incidents of molestation and rape against women in the country. The device will be attached via Bluetooth by putting it inside the ornament. If a woman is in trouble, by pressing the button in the ornament it will give her location on the contact numbers of both the police and family members so that the women in distress can be protected.”

Rajendran said that the compact and convenient device could be tucked into your wallet and it would still work. It means you don’t really have to wear it but you can carry it around in your handbag at a place where you can reach the button whenever you feel threatened or unsafe. It works even when your screen is locked so that’s really great.

The scientist Shyam Chaurasia who worked on the technical aspects of the design said, “Whenever late-night working women get into trouble, molesters snatch their mobile phones and wallets. By pressing the device in the ornament, the Bluetooth attached will start working. It works within a range of 3 to 5 metres. This device will protect the woman as well as her ornament. It contains a Bluetooth module and a chargeable battery which lasts nearly 10 hours. This jewellery has been named ‘Women safety anti-teasing jewellery’. It took 2-3 months to build this device and costs nearly Rs 900. It is completely ‘Made in India.”

This is not the first protective jewellery to be made in India. Before this, a bunch of IIT and DTU graduates developed a similar smart jewellery under their start-up brand Leaf back in 2015. The dainty pendant jewellery christened SAFER was created by Paras Batra, Avinash Bansal, Ayush Banka, Chiraag Kapil and Manik Mehta that comes with similar features as the ‘shining armour’. It is programmed to sound a shrill alarm and send SOS alert to pre-listed contacts with a double tap. It works on Bluetooth and SAFER app and also sends location to the nearby police station and hospital.

Paras Batra told ET, “It will take time for the concept of wearable technology to go mainstream in India, but it has started to kick in. One of the reasons could be that they are not ‘wearables’ in the true sense of the word as yet. Most are too big or ‘geeky’ and does not go with what people usually wear. Once that gap is narrowed down and as the Internet of Things continue to develop, there will be a greater chance of wearables becoming commonplace.”

There are plenty of safety apps that you could keep on your phone and avert risk but it comes with it has its own cons. First of all, not everyone has the time and vigilance to look for the phone in the bag, take it out and open the app to send alert when someone is attacking you. No one is trained in Unagi here and something like that could really put you in complete shock for a couple of seconds there. Plus, that would only work if your phone is charged. This is where the panic buttons on these handy gadgets like jewellery and lipstick truly help in ensuring safety of women in times of need. A nonchalant safety gear around your neck is so much better and convenient than safety apps, knife, pepper spray, key chains and other traditional gadgets women rely on to protect themselves.

Imagine you could wield your pretty and dainty jewellery as a weapon to set an attacker right and protect yourself. Who wouldn’t want that?

Also Read: A Woman Taekwondo Expert Developed A ‘Hand Grenade’ To Help Women Feel Safe. Because Our Safety Is Still Our Problem