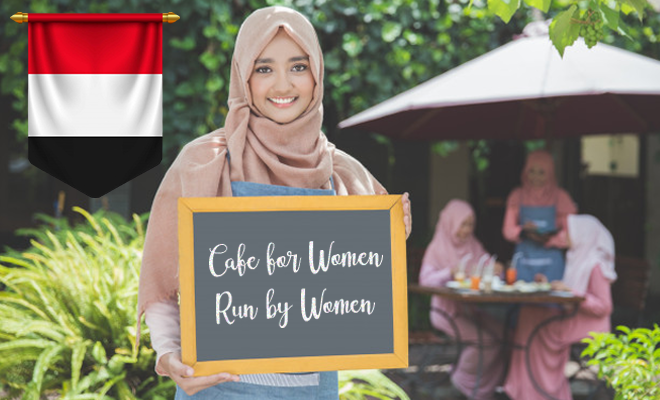 We have some exceptional businesswomen to look up to in our country who have singlehandedly built an empire and have their businesses raking in millions. These women inspire us to leave our 9-5s and take the plunge into the business world too. You’d think that today’s world, there’s nothing really holding women back to go that extra mile and start up a venture but that’s not true. For many women, it is an uphill battle, especially in countries where women struggle to even exercise their political and civil rights. In Yemen, for example, women are victims of serious gender disparity, and economic opportunities are barely available

But here is a Yemeni woman who is creating her own opportunity while also generating job prospects for other women too. Um Feras set up an internet café named Morning Icon Café in Marib, central Yemen which consists of all-women staff and is open exclusively for women. Upon realising that there was no recreational spots for women in the city, she decided to found the café last year in April. “There were no places for women to gather comfortably, no places belonging to the female community: where the team from administration to the youngest employee is female,” said Feras.

This venture smashes the societal norm of the country that frowns upon and often forbids women to work outside and have business opportunities. Feras is not only creating a safe space for Yemeni women in the face of a leisure space but also paving the way for more women to take the entrepreneurial lead. We love this!

This cafe in Yemen is run by women, for women https://t.co/KlNEnrTZ40 pic.twitter.com/j5VGgm7K3I

Also Read: Arjun Kapoor Invests In A Startup That Supports Women Entrepreneurs. We Need More Men Like Him

Yemen is a country that is severely hit by civil wars and thus financial crisis and running a business like this is not a cakewalk, especially for a woman. Feras said that her enterprise is often considered strange and unconventional by the local people for it’s not usual for women to think beyond housework. Moreover, the concept of a café is another thing that people with regressive attitudes think of as unacceptable to be run by a woman. “The word ‘cafe’ can be associated with negative ideas and convictions … Every new idea will have its supporters and opponents,” said Feras.

Her customers mostly comprise of female students who flock to the café to blow off some steam or work as it offers good internet network and a safe place since it only consists of women. And you just know how comfortable and enjoyable that would be to not be stared at or judged by men in a male-dominated country. Through this café Feras want to set an example for other Yemeni women to shatter the glass ceiling and explore business opportunities. She is also looking to expand her business into a larger space to accommodate women and children. Although she is struggling with the fluctuating currency rates and naysayers, it is nowhere breaking her spirits to bring a positive shift to how the society perceive women entrepreneurs.

When Um Feras realised there were no leisure spaces for women in her city in Yemen, she founded her own cafe, hoping to change attitudes about women-led businesses. She aspires to expand into a larger leisure spot for women and children. #yemen #yemennews #worldnews #bbc #trending #womenofyemen #stayupdated #umferas #yemencafe #yemenwecare #cupsngups #entertainment #lifestyle #media

In the recent times, women in middle eastern countries, including Yemen, have been fiercely engaging in business world and start-up ecosystem which is great for the individual financial independency of the female population and the society as well. This women-led café by Um Feras is just one example of a woman turning from housewife to successful and powerful businesswoman can bring in a greater change and positive future prospects for other women as well. This is truly amazing.

Also Read: This 27-Year-Old Woman From Manipur Has Started A Business Of Spinning Yarn From A Lotus Stalk. It’s Such An Innovative Idea